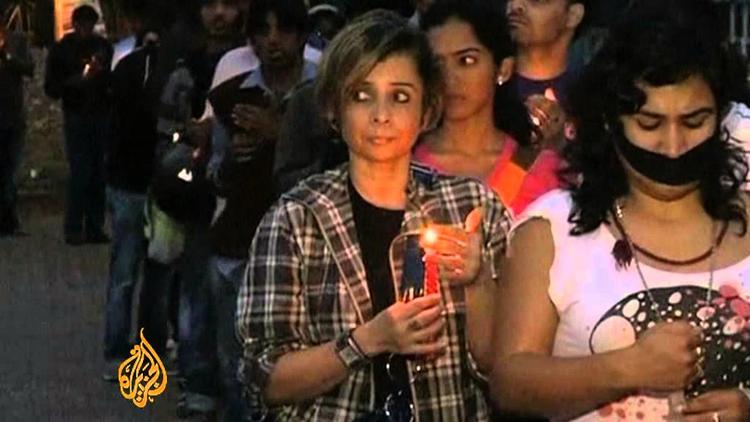 The unnamed Indian woman who was gang-raped on a bus in New Delhi and had to be sent to Singapore for medical treatment has died and her body has been cremated back in Delhi, provoking further protests throughout India.

Rape is always about power, not sex. India is a highly patriarchal society. In some parts of India, women’s literacy is half that of men. Marriages are for the most part arranged, and a majority of young men has never been on a date with a woman or have a framework for interacting with strangers of the opposite sex. Because of the high value placed on a bride’s virginity (especially in traditional milieus) and the dangers to a girl’s future if there is a taint on her honor, rape is often not reported, and the men who rape are counting on this reticence to go public.

Sometimes caste hierarchies are at play – low-caste women are at greater risk of being raped. (Classical Hinduism recognizes 4 castes, though there are many sub-castes; members high-ranking castes such as Brahmins and Kshatriyas often can mistreat Shudras and Dalits with impunity. In short, the problem of rape is in part the problem of a highly unequal society where women are low status and often somewhat segregated and disadvantaged. Economist Amartya Sen estimated that because girls are less valued and less well taken care of when ill, there are millions of missing girls in India – girls who died from relative neglect compared to what their brothers got. There is also a growing problem of families aborting daughters once the sex of the embryo is known via ultrasound. In India, typically the bride’s family must provide the groom with many expensive gifts, so that marrying off the girls of the family is extremely expensive and poor fathers and mothers would like to have high-value sons instead.

There is little doubt, as well, that poor police work and unsympathetic police are part of the problem. When I lived in India, I heard horror stories of police actually themselves raping young women who went to them for help. That is something that can be reformed.

But the larger challenge for a rising India, which will be one of the great powers of the 21st century, is to elevate the status of women.