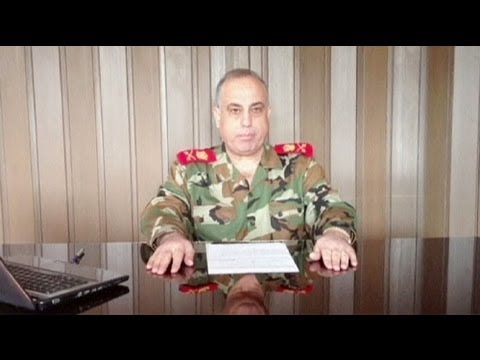 Maj. Gen. Abdul Aziz Jasim al-Shalal, head of Syria’s military police, defected late Tuesday to Turkey, joining the revolutionaries against the regime. He announced his defection in a YouTube video, saying that the Syrian army is no longer fulfilling its primary mission, of defending the country from attack, but rather has become a gang attacking the country’s own people. He said that many officers want to defect. He also alleged that the regime did indeed use gas against rebels recently.

Meanwhile, over 100 Syrians were killed around the country on Wednesday as the regime continued to fight an ever-widening insurgency and popular revolution. Regime forces were alleged by rebels to have massacred 20 non-combatants in Qahtaniya, Raqqah Province. The Syrian Human Rights Observatory in the UK now estimates that the death toll in the revolution that began in spring, 2011, has climbed to 45,000.

Facebook comments by anti-regime dissidents say that Maj. Gen. Shalal had for some time been sympathetic to the uprising, and had sometimes had police barricades removed for more effective popular protests. He may have been suspected by the regime in recent weeks of insufficient loyalty, and was scheduled for retirement next month.

He was not well known in Syria, since the MPs mainly deal with discipline issues among the troops themselves. But his defection is surely a blow to regime morale for exactly that reason. If it is true that the head of Syria’s military police has for some time been cooperating with the revolutionaries, that is yet another very bad sign for the collapsing regime of President Bashar al-Assad and his Baath Party.

Shalal is not the most senior military figure to go over to the other side. Manaf Tlass, Brigadier General of the Syrian Republican Guard and his brother and father (a former Minister of Defense) have defected. And, a prime minister, deputy ministers, and a number of ambassadors have also joined the opposition.