Alice K. Ross writes at the Bureau of Investigative Journalism:

Last week Amnesty International highlighted just how troubled this tribal region is, charting human rights abuses by both the Pakistani army and the Pakistani Taliban.

The Hands of Cruelty demonstrates how the region’s estimated civilian population of three million, is trapped between two opposing yet similarly vicious forces.

The report accuses the Pakistan army of rampant summary detentions with no due process, torture and deaths in custody. Victims recount being accused of links to the Taliban on flimsy evidence, and being beaten and tortured in detention. And they are the ones who lived to tell the tale. The report also includes testimony of families called in to pick up the bodies of their loved ones, and how they found signs of ill-treatment and torture on their bodies.

See the Bureau’s investigation into drone strikes on Pakistan 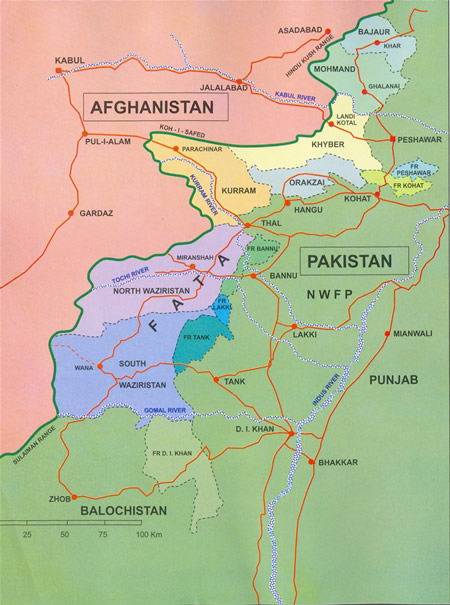 Amnesty has encountered 39 cases of ‘enforced disappearance’ in the Federally Administered Tribal Areas that it says are linked to the Army. This figure, it claims, could be the tip of an iceberg, as local courts indicate there are thousands in custody, many whose families have no idea where they are.

The Taliban, meanwhile, dispenses its own form of summary ‘justice’, says the report. Singled out, according to Amnesty, are those the Taliban accuses of spying, supporting the ‘enemy’ or backing agendas that militants believe are ‘un-Islamic’, such as women’s rights. This includes staging trials that fail to meet international standards for justice and human rights, and which often end in summary executions.

‘The Taliban and other groups have particularly targeted human rights activists, humanitarian workers, journalists and individuals accused of spying,’ Amnesty suggests. And of course, targeting these individuals means information about the lives of people in the region is even scarcer.

In other cases, militants ignore any semblance of a trial and simply execute those they accuse of breaking their laws. There are signs that the Taliban uses executions of alleged spies and the mutilations of their bodies to discourage others who may be tempted to turn informant.

The tribal region is often described as ‘lawless’. But it’s easy to overlook the impact that lawlessness has. Amnesty lays the blame for the appalling litany of abuses charted in the report squarely at the door of the government, which it says has failed to ‘extend the hands of justice to the Tribal Areas’. This has given both the Army and Taliban ‘total impunity’, it adds.

‘Without urgent action by the Pakistan government to guarantee respect for human rights in the Tribal Areas, millions will continue to be locked in a perpetual state of lawlessness,’ the report notes.

The human-rights implications of the CIA’s drone campaign on the region’s civilian population are coming under increasing international scrutiny. But as The Hands of Cruelty indicates, drone strikes are far from the only threat to the human rights of those living in the tribal belt.