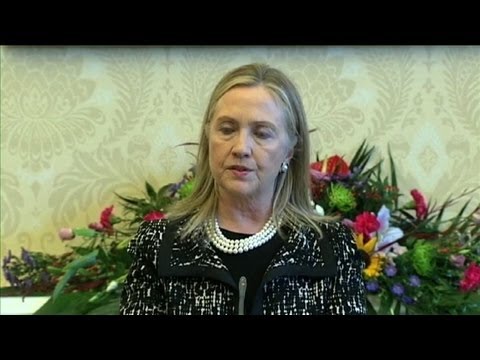 US Secretary of State Hillary Clinton called for a ‘concerted push’ on Friday to begin a political transition in Syria. She said that the transition must eventuate in a unified, democratic Syria. AFP reports:

Meanwhile, former Secretary of State Colin Powell’s chief of staff, Lawrence Wilkerson , expressed severe reservations about what he called ‘politicized’ intelligence about alleged Syrian government preparations to use chemical weapons against its rebels.

ITN reports on advances by Aleppo’s revolutionaries and their attack on an Air Force intelligence compound: “A new video appears to show Free Syrian Army fighters preparing for a battle against government forces in Aleppo. Report by Mark Morris.”

The Syrian revolutionaries continue with their campaign in Damascus suburbs and at the airport.