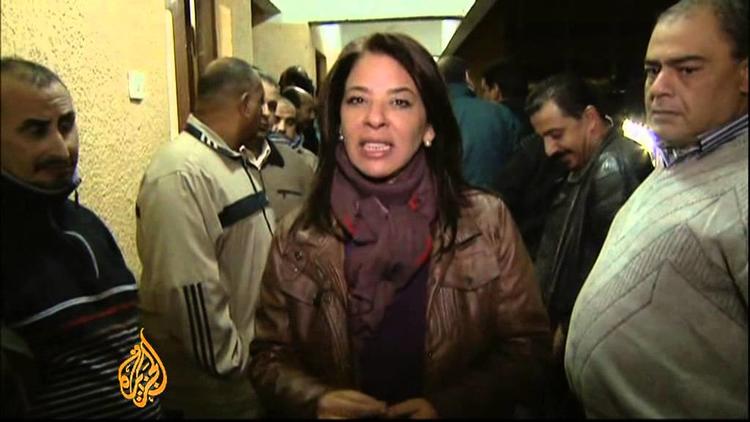 Early returns from the Egyptian provinces that voted in a two-stage referendum on Saturday suggest that the draft constitution garnered some 56% of the vote. It was rejected in the capital, Cairo, and in the Delta province of Gharbiya, but won in the 8 other provinces where voting took place on Saturday, including Alexandria and the two populous Delta provinces of Sharqiya and Daqahliya. These latter two are a surprise, since they were taken by Ahmad Shafiq, the secular old-regime candidate, in the June presidential run-off. The constitution was largely produced by the Muslim Brotherhood, out of which the president, Muhammad Morsi, comes. So a vote for the constitution was a vote of confidence in the president, though many less politicized voters may have just wanted stability. Still, that Morsi only got 45% of the voter in Sharqiya in June, but pulled off 66% in favor of his constitution now, is such a large discrepancy that The Brotherhood’s critics are sure to suspect fraud. Likewise, Morsi got 44% in Daqahliya in June but his constitution just passed there by 55%!

Although Morsi got his constitution, he won’t very likely have gotten the stability Egypt desperately needs for its economy to progress. The most recent analogous constitutional process, that of Iraq in 2005, was equally as contentious, and was opposed by even fewer Iraqis than opposed the Egyptian one. But the Sunni Arabs rejected it, and its passage arguably threw the country into civil war and long-term turmoil. Dr. Morsi likely will find that some victories haunt one.

Here are the things wrong with the way this constitution was passed:

1. The drafting committee or “Constituent Assembly” that produced this draft was not representative. It was dominated by Muslim Brothers and their supporters. After the courts ruled that members of parliament could not serve on it, some nevertheless did. It had no women on it. Some 22 members drawn from liberal, leftist, Christian and centrist currents had resigned in protest before this draft was suddenly completed on November 30.

2. Leftists, liberals and Muslim centrists launched large demonstrations against the way the constitution-drafting was hijacked by the religious Right and demanding that a more representative process be instituted. A constitution should be a consensual document. This one is not.

3. Substantial numbers of Egyptians felt that they did not have time properly to study and debate this constitution.

4. The rules needed for observers to function properly were not issued in time, so that the Carter Center and other international organizations declined to send observers. The probity of the referendum is in doubt.

5. Most Egyptian judges went on strike and most refused to supervise the ballot boxes. Professors and others from outside the judiciary were called on to supervise. This step is illegal in Egyptian law. It is suspected that many of the impromptu ballot committees were drawn from the Muslim Brotherhood and so were biased. There are some reports that at a few polling stations, no one was in charge. The security and legitimacy of the ballot boxes cannot therefore be certified.

6. Many voters had to stand in line for an unreasonable 3 or 4 hours to vote because of inadequate staffing of polling stations.

7. The text of the constitution is not actually complete. Many paragraphs require further legislation by a future elected parliament. Under these circumstances, in some instances people could not even know what they were voting for.

8. Security was not sufficient for a referendum to international standards. In the two weeks leading up to the vote, there were violent clashes in the streets in several areas of the country. HQs of the Muslim Brotherhood and its civil party wing, the Freedom and Justice Party, were burned. Leftists and liberals were attacked and in some instances kidnapped and tortured. On Saturday night, the offices of the liberal Wafd Party and its newspaper were attacked by by hard line Salafi fundamentalists. Many Coptic Christians belong to the Wafd, and the party opposes the constitution. One reason for the low turnout may have been a certain amount of apprehension on the part of voters about their safety.

9. There are plausible reports of continued campaigning at polling stations and of intimidation of non-Brotherhood voters,

10. 56% is not a sufficient margin for the successful passage of a central organic law for a society. You could not at the moment even pass a statute in the US senate by that margin. If Morsi and the Brotherhood were wise, they would recognize that they have polarized the country and would hold elections for a new constituent assembly.

Still, although this process has been deeply flawed, the politicking around the constitution has been vigorous, and an elected president did submit the document to the people for a vote. If people decide that the referendum was irregular or even stolen, however, it won’t be greeted as a victory for democracy. If future elected Egyptian parliaments don’t like some provision in it, they can amend it. The Brotherhood is playing rough, but they still seem committed to the democratic process in the sense of submitting to further elections.

New parliamentary elections will now likely be held in late February. Leftists, liberals and centrists could do very well in them if they campaign vigorously and learn how to walk neighborhoods.

The dark cloud on the horizon is that the Brotherhood seems committed to a tyranny of the majority and is unwilling to compromise. If they keep playing Nouri al-Maliki of Iraq, they risk getting his problems.