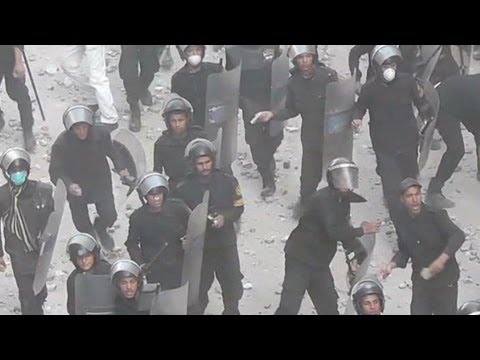 Minister of Defense Gen. Abdel Fattah al-Sisi warned Tuesday that if the country’s turmoil continued, Egypt faced the possibility of a collapse of the state.

The intrepid Ben Wedeman of CNN reports on the ambivalence of the Egyptian police about being ordered by a Muslim Brotherhood president to crack down on protesting youth. He thereby helps explain why Ismailia, Port Said and Suez managed to blithely defy the president’s attempt to impose emergency laws and a curfew.

Wedeman also interviews retired Gen. Sameh Seif al-Yezal, who interprets al-Sisi’s statement as a warning against the country sliding into civil war, which al-Yezal thinks is a real possibility.

Meanwhile, President Muhammad Morsi backed off his decree of emergency law and suspension of civil liberties in the Canal cities of Suez, Port Said, and Ismailia, which have seen vigorous protests against his government since the Jan. 25 two-year anniversary of the beginning of the Egyptian revolution.

Morsi left it to the provincial governors of the three cities to decide whether or how to implement the emergency decree, or whether to cancel it. His spokesman said it was not intended to suspend peaceful protests.

Protesters in the three cities refused to observe the curfew the president put in place on Monday and Tuesday nights, mounting demonstrations and playing soccer in front of government buildings. As Mr. Wedeman reported, the police seem uninterested in intervening.

Although most Egyptians are indignant at being compared to Algeria, it should be a cautionary tale for Dr. Morsi, as it is for Tunisian Muslim leader Rashid Ghanoushi. In 1992-2002, some 150,000 Algerians died in a vicious civil war between secularists and fundamentalists. The same division is emerging in Egypt, and the secular and moderate-religious forces are increasingly rejecting the legitimacy of Morsi’s rule. Two competing claims to sovereignty are what make for a civil war.

Morsi created this polarization by pushing through a fundamentalist-tinged constitution and by forming a Muslim Brotherhood government that excludes his opposition, even though he did not win the presidency by a very large margin. His tendency to issue sweeping decrees and to favor his Muslim Brotherhood cadres has created a fear that he just wants to be a fundamentalist Hosni Mubarak and does not really have the instincts of a democrat.