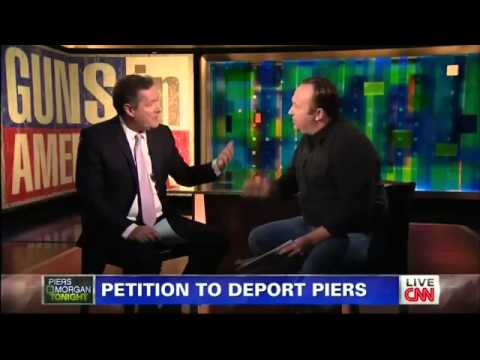 Alex Jones’s angry appearance on Piers Morgan’s CNN interview show on Tuesday has provoked a lot of discussion, but what strikes me is that Jones threatened to launch an armed insurrection (1776) if the government attempted to outlaw semi-automatic weapons (or as he put it “to take our guns.”)

Of course, Jones got away with this, whereas if he had been a Muslim and said the same thing, his sorry ass would be in Gitmo or droned by now. It has not been proved that Anwar al-Awlaki, and American citizen killed by a US drone in Yemen, did more than threaten the US.

Did what Jones said amount to terrorism?

According to the US Code of Federal law:

(5) the term “domestic terrorism” means activities that—
(A) involve acts dangerous to human life that are a violation of the criminal laws of the United States or of any State;
(B) appear to be intended—
(i) to intimidate or coerce a civilian population;
(ii) to influence the policy of a government by intimidation or coercion; or
(iii) to affect the conduct of a government by mass destruction, assassination, or kidnapping; and
(C) occur primarily within the territorial jurisdiction of the United States.

Jones, a gun nut who asserts that the Oklahoma City and 9/11 bombings were planned and carried by the Federal government and who rebuilt the church of the Branch Davidians at Waco, Texas, is certainly guilty of trying to coerce a civilian population (those of us who want a semi- automatic weapons ban).

He also is attempting to ‘influence the policy of a government by intimidation and coercion.”

The only reason Jones is not guilty of terrorism in this outburst is that he hasn’t taken any practical steps. That is, there has to be a clear and present danger that a threat will end in violence for law enforcement to get involved.

But making public policy by threats and intimidation, along with forms of violence, is what al-Qaeda does.

If Jones doesn’t like gun control, he can fundraise and send a representative to Congress, and influence legislation that way. Threatening war is just a form of coercion, i.e. terrorism, carried out in order to get your way on government policy.