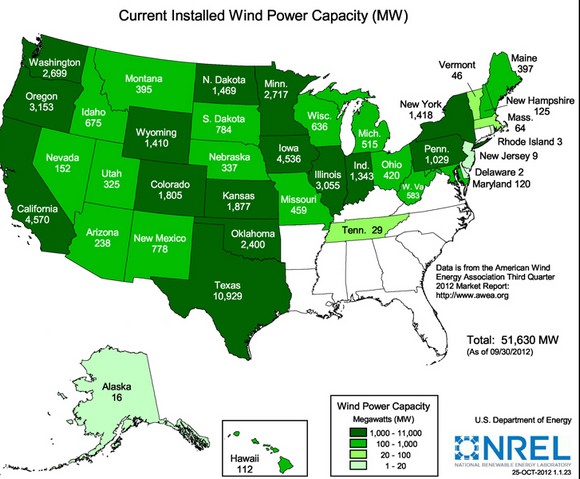 While it is important that the Bush tax giveaway to the wealthy begin to be reversed if the US budget is ever to recover its health, the bigger significance of the budget deal passed yesterday by both houses of Congress is that the wind power tax break was restored for 2013.

Actually, even this extension is too little, since the industry needs more surety of longer term arrangements if it is to thrive. But, well, the renewal is a good thing, and now needs to be extended.

The United States has the highest per capita carbon emissions of any large, industrialized country in the world, with each American producing roughly two tons of the deadly greenhouse gas annually. In turn, the some 5 billion tons of carbon emitted by the US annually is causing rapid global warming and climate change, including the prospect of rising seas. Although US emissions have fallen since 1990, it is largely because of the economic slowdown and the resort to fracked natural gas. Gas fracturing may be releasing dangerous amounts of methane, another greenhouse gas). Natural gas itself is replacing dirtier coal. (Fracturing gas out of the shale But each of us in the US is still a carbon hog.

The US is not moving nearly quickly enough to cut its emissions. Only about 6 percent of US electricity comes from non-hydro renewables. Here in the Midwest, the regional average for electricity generated by coal– the worst of the hydrocarbon fuels — is 65%. That statistic, in 2013, is a crime akin to killing one’s mother. The storm surge that hit New York this fall was a small indication of what nature has in store for us if we go on this destructive path.

The Congressional foot dragging on renewing the wind tax credit slowed the rate of turbine installations in 2011 over 2010, and some 30,000 workers in the wind industry faced being laid off if the tax break was abolished. This outcome was plotted out by the Koch brothers (Big Carbon billionaires who like to play at politics) and other oil, gas and coal interests.

Among all the states, Texas, California, Iowa, Oregon and Illinois had the most riding on the program, since they are the leaders with regard to how many wind turbines they have installed. Iowa gets 20% of its electricity from wind turbines now, and the Iowa-based MidAmerican utility has wind as 30% of its energy mix (it also has a big natural gas component; gas burns more cleanly than coal).

On Christmas Day, Texas reached a new record, when at one point about a quarter of its electricity was coming from wind turbines— over 8 gigawatts!

Not every state has a lot of potential wind power. Georgia, for instance, is not well placed to profit from this form of power given current technology. My own state, Michigan, is not that well endowed, either. But the US as a whole has enormous amounts of potential wind power. Many states that could generate a fifth of their electricity needs with free fuel are not bothering to do so.

Of course, the Federal government is not the only driver of the move to renewables. The far-sighted governor of Oregon is mandating new electricity be from renewables and is streamlining the wind turbine permit process. (Permitting by state and local government is among the major obstacles to installing solar panels and wind turbines).

Still, the federal impact can be great, since it has an effect across states. Wind companies say that the tax break is the difference between being profitable in today’s market and not quite making it. Wind is at grid parity (costs the same per kilowatt hour) with hydrocarbons in some parts of the country, however, and within just a few years both wind and solar will be so cheap that it will be crazy to burn coal or even gas.

That day will come sooner if our elected representatives don’t sabotage progress, which they almost did on Tuesday.

We need the wind tax credit extended until 2020, after which it just won’t be needed. But note that we have been subsidizing the oil companies with billions a year for decades and no one even seems to complain about that.