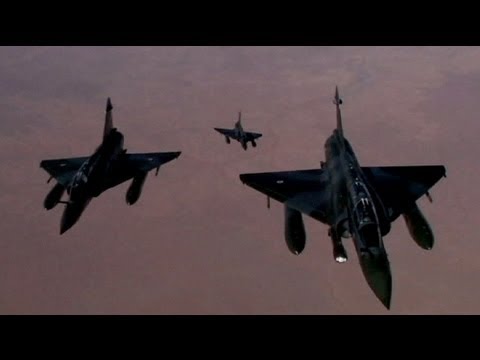 The Socialist government of France’s Francois Hollande intervened in Mali on Friday and Saturday to stop the advance of Muslim fundamentalists toward the capital, with operations continuing today (Sunday). The radicals had taken Konna, a few hundred kilometers north of the capital of Bamako, which Hollande’s government appears to have considered a red line.

The intervention was staged by helicopter gunship and Mirage jets, which allegedly killed about 100 of the rebels. Hundreds of troops of the 4th Helicopter Combat Regiment of Pau, which had been prepositioned in Burkina Faso, came over to the capital of Bamako, and some flew up to Konna.

Under a United Nations Security Council resolution authorizing the use of force to support the Mali government, the Economic Community Of West African States (ECOWAS) had planned an intervention with some 3000 troops. It will mainly be a Nigerian force, with Senegal, Burkina Faso and Niger also pitching in 500 men each. The idea was to train the Malian army to defend its own country, which meant that no offensive was originally envisaged until September. The advance south of the fundamentalists forced Hollande’s hand. He is likely getting pressure from Algeria and other neighbors of Mali to do something before the radicals march into the capital and then have a whole country from which to launch further attacks. Hollande said he considered Ansar al-Din a threat not only to Mali and its neighbors but to France and Europe. It responded by threatening France. ECOWAS now says that a few hundred troops will be deployed to Mali immediately.

A coup in the capital last year was taken advantage of by at least two groups in the vast north of the country (an area as big as France itself). One was the relatively secular Tuareg, who proclaimed an independent Berber state, Azawad. The other, however, was Muslim fundamentalists, Ansar al-Din and the Movement for Unity and Jihad in West Africa (Mujao). They appear to have subordinated the Tuaregs in much of the north, and by Thursday had taken Konna and were heading toward the central town of Mopti. The French intervention stopped their advance toward the capital.

Mali, a country of about 16 million (roughly the demographic size of the Netherlands or a little less populous than Florida), is 5 percent animist, 5 percent Christian, and 90 percent Muslim. But most Malians practice a Sufi and liberal-minded form of the religion, which values music and urbane culture. A small radical group based in the country’s vast north has come under Wahhabi influences from Saudi Arabia and wants to impose their fundamentalism on the whole country, attacking Sufi shrines (the equivalent of saints’ tombs in Catholicism).