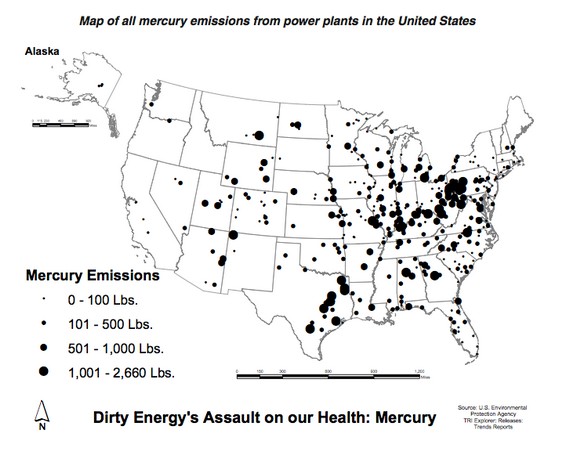 Mercury is a nerve poison, steady exposure to which causes all kinds of neurological and mental problems, as well as heart problems. I keep hearing public service announcements that you should not eat fish more than twice a week.

Think about that. In a natural, normal world, didn’t people on the coast eat fish every day? Why avoid fish? It is because fish big enough for us to eat with profit are high on the food chain, and so concentrate toxins like mercury. But why is there so much mercury in the environment, that it is getting concentrated in our salmon?

Coal-fired power plants are responsible for half of all human-caused mercury emissions annually in the US. The plants released 134,365 pounds of mercury in 2006 alone! Only 8% of plants have mercury-scrubbing capabilities in place.

Concerned Scientists note that “Just 1/70th of a teaspoon of mercury deposited on a 25-acre lake can make the fish unsafe to eat.”

A people with any self-respect would insist that all these coal-fired power plants be closed within 5 years:

Not only is burning coal the fastest route to catastrophic climate change, it emits mercury into our lakes and streams, which then gets into our fish– as Sue Sturgis points out, citing Environment America

Here are some statistics she has culled:

15 % of US women of child-bearing age have enough mercury in their bloodstream to put their offspring at risk from health effects.

In 1999: percentage of women of childbearing age with inorganic mercury in their blood: 2

I tear my hair out when I hear that people aren’t getting vaccinations for their children because they are afraid of autism. But emitting 134,000 pounds a year of mercury in our environment? That’s not a problem.

The Union of Concerned Scientists adds:

“Coal plants are the nation’s top source of carbon dioxide (CO2) emissions, the primary cause of global warming. In 2011, utility coal plants in the United States emitted a total of 1.7 billion tons of CO21. A typical coal plant generates 3.5 million tons of CO2 per year2.”

If your electric utility depends on coal, contact your city council and urge it to put in wind turbines and solar and generate its own electricity, getting off the dirty, poisonous grid! Boulder, Co. is now playing hardball that way, Sacramento created large numbers of jobs with its green energy commitments.

We don’t want your dirty coal!