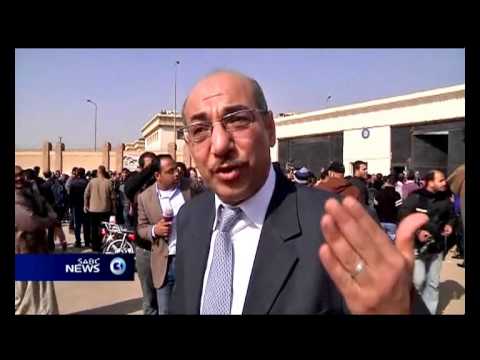 An Egyptian court ruled against the fans of the Port Said al-Masri soccer/ football team, sentencing 21 of them to death for their role in provoking a stampede on the field last year. It is widely believed in Egypt that the al-Masri fans, called ultras or football hoodlums, deliberately caused the stampede, which killed dozens of people, and that they were hand in glove with Old Regime security officials who wanted to punish the al-Ahli ultras for their role in making the revolution against Hosni Mubarak. The court appears to have taken this theory seriously.

The al-Ahli ultras in Tahrir Square in Cairo went wild with joy at the verdict. But in Port Said, families of imprisoned ultras tried to free them, and the city erupted in protests, so that the national army had to come in and occupy it.

Friday saw another day of big protests and police repression in Egypt’s major cities. The protesters, who want the military to withdraw from politics and go back to the barracks, were galvanized by the soccer tragedy at Port Said on Wednesday, where some 74 persons were crushed in a stampede after local ultras (soccer hoodlums) supporting the al-Masri team attacked those cheering for Cairo’s al-Ahli team.

Ahli soccer rowdies had played a leading role in the overthrow of Hosni Mubarak in 2011, and I saw them lining up around Tahrir Square last summer to provide security to a second round of protests. Ultras had often fought police after games, and used that experience during the revolution. Those in Egypt’s dissident movement already predisposed to see the military and police as holdovers of the Mubarak regime darkly suspected that police in Port Said had their own thugs target Ahli ultras in an act of revenge.

Even level-headed Egyptian authorities, such as judges in the judiciary, took this theory seriously enough to forbid the head of the Egyptian soccer federation to travel abroad, along with the governor of Port Said.

You can’t really understand the Arab world unless you appreciate the importance of what Americans call soccer (in most parts of the world it is just “football”). “