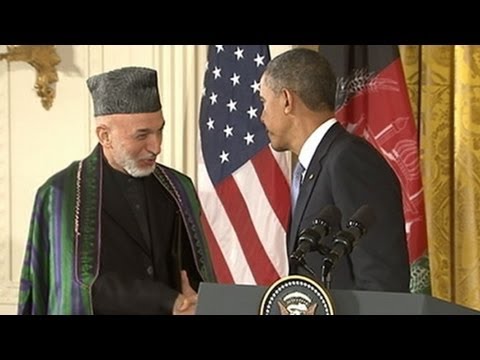 1. President Obama moved the deadline for the end of US combat missions in Afghanistan up from July 31 to “this spring.” At that point, the Afghanistan National Army will take the lead in all military actions against Taliban and other militants. US troops will mainly be training the ANA or providing close air and logistical support. The troop withdrawal will be accelerated.

2. US forces will be withdrawn from villages.

3. Karzai reversed himself by pledging to at least try to get Afghans to accept immunity from prosecution in Afghan courts for any remaining US troops after December, 2014, the number of which Obama said would be ‘very limited.”

4. The Obama administration pledged to leave behind more military equipment for the Afghanistan National Army than earlier envisaged, including C-130 helicopters and other aircraft, according to Aimal Faizi, spokesman for President Karzai. (Pajhwok Afghan News)

5. The US agreed to turn over to the Afghanistan government the Bagram prison and other prisons, where the US holds large numbers of captured Taliban. These prisoners will be given to the Karzai government.

6. In Thursday discussions with Secretary of State Hillary Clinton, the US and Karzai agreed to build on so far desultory talks with the Taliban. Likewise, Karzai met with the acting head of the CIA, Michael Morell. It was agreed that the Taliban would be allowed to open a political office in Qatar, so that negotiations could be pursued with them, and that further political bureaus might be opened in Saudi Arabia or Turkey.(Pajhwok Afghan News)

7. The NATO military (ISAF) deputy head for operations and plans, Brig. Gen. Adam Findlay, says that 80 percent of military operations are now led and carried out by the Afghanistan army, while 20 percent of “complex offensives” are still led by ISAF. (Kabul Pajhwok Afghan News)

8. Findlay said that only 17 districts in the country accounted, he said, for half of all operations by Taliban and other militants.

9. Of civilian non-combatants killed in the fighting, Findlay reported, 84 percent were killed by the Taliban and other militants in 2012.

10. Karzai is asking the US to establish branches of American universities in the war-ravaged provinces of Afghanistan. He is confident that this step will improve the situation for his country. (Kabul Pajhwok Afghan News)