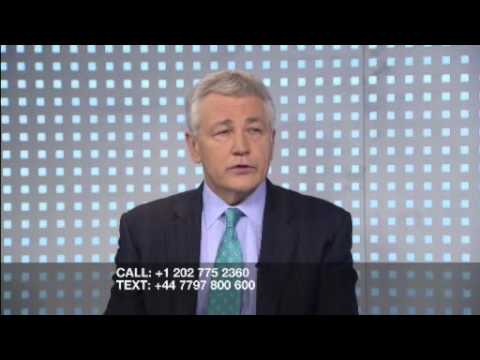 The confirmation hearing in the Senate for Chuck Hagel, President Obama’s nominee for Secretary of Defense, was painful to watch because it displayed the tomfoolery, pretense, self-righteous know-nothingism, and embarrassing lack of contact with reality that dominate the landscape of America’s broken democracy. It was like watching a Nebraska ordinary Joe set upon by circus freaks– a phalanx of moral midgets, stalking cat-men, vicious lobster boys and ethical werewolves.

Those who regretted that Hagel seldom stood his ground, often just deflected persnickety questions, and sometimes was made to recite the catechisms of Neoconservative orthodoxy, should remember that what is important in Washington is willingness to conform orally, regardless of what one actually believes or how one acts. Hagel might agree to look like he is being pushed around by his former colleagues, for the sake of their face and his. He won’t agree actually to be pushed around once he is in office.

Ted Cruz, a Texas tea partier who probably won’t be there after Texas turns blue in a few years, tried to carry out a Fox News-style ambush of Hagel. He played a 2009 Aljazeera interview of Hagel on the issue of nuclear disarmament.

At one point a caller called in from London with a rambling statement, who made an argument that there is a double standard, with the US and its allies free from international law on things like possessing and using nuclear weapons, whereas other countries are held to stricter standard. He said that this unequal application of the law was clear in that Omar al-Bashir, the president of Sudan, had been convicted of war crimes in Darfur by the International Criminal Court, but Israeli leaders, who had committed war crimes against the Palestinians, had been held harmless. He went on rambling, complaining about alleged war crimes the Sri Lankan government committed against the Tamil Tigers, then the host asked him for a question and to finish up. When Hagel responded, he began by saying he agreed with the caller’s point. It is obvious to me that he was agreeing that there had been a double standard, and he later said it should be overcome with regard to nuclear disarmament by the US and Russia taking the lead to reduce stockpiles. The caller had a thick accent and it wasn’t even clear that Hagel understood everything he said in his rant, much less meant to agree with it. Is Cruz saying that Hagel was agreeing about Sri Lanka, too?

The relevant bit begins at 6:26 minutes in:

Cruz insisted that Hagel should have disagreed with the caller about Israel having committed war crimes, given that Jews were victims of war crimes. Cruz is a truly bright and energetic man, with a Princeton education, who clerked for Rehnquist. He knows very well that he is lying about Hagel. And he knows that Israel is guilty of plenty of war crimes. He managed to make Hagel deny this obvious fact, however. Cruz’s performance underlines the importance of Christian Zionism in reinforcing the crackpot conviction in the US senate that it is impossible ever to say anything slightly negative about Israeli policy (the only country in the world so exempted).

Or how about “UN mission finds evidence of war crimes by both sides in Gaza conflict.”

In fact, a British court issued an arrest warrant for Tzipi Livni for her role in launching the attack on Gaza in 2008-9, and it is not clear that she can travel to the UK without fear of arrest. The charge, Senator Cruz? War crimes.

Ah, and then there is Lindsey Graham, the Red Queen of the Senate (who is the essence of the pedantic governess and asks through-the-looking-glass questions like: “Divide a loaf by a knife: what’s the answer to that?”).

Graham wanted to know why Hagel voted against the 2007 senate resolution declaring the Iranian Revolutionary Guards Corps a terrorist organization.

The reason that was a dumb resolution is that terrorism is defined in the US civil code as the deployment of violence by a non-state actor against civilians for political purposes. Since the Revolutionary Guards are a kind of Iranian national guard, they are not a non-state actor. They are therefore not a terrorist organization. They may deploy terror, but it is state terror. (The senate also said they were terrorists because they were guilty of killing US troops in Iraq. First of all, there is no evidence that is true. Second of all, killing troops is not terrorism, it is an act of war). Graham’s position is illogical and makes a hash of any reasonable definition of terrorism.

Graham wants to pile on illogical charges against Iran and its institutions in order to force the US into a war on that country, which is 3 times more populous and much more geographically vast than Iraq. Because, like, Iraq went so well, I guess.

Then the Red Queen went after Hagel for having said that the “Jewish lobby” intimidates people. He demanded, “Name one person here who’s been intimidated by the Jewish lobby . . . Name one dumb thing we’ve been goaded into doing due to pressure by the Israeli or Jewish lobby.”

Hagel said he didn’t have anyone in mind.

The irony, of course, is that Graham is himself part of the Israel lobby, and there he was intimidating Hagel for complaining about having been intimidated!

All the congressmen and senators know that the Israel lobby intimidates them or tries to, on a daily basis. Ernst Hollings complained, “you can’t have an Israeli policy other than what AIPAC gives you around here.” AIPAC is the American Israel Public Affairs Committee, the de facto foreign agent of the Israeli government in the United States, which gets away with not having to register as such because it has bought off or intimidated Congress. 22-year Illinois veteran of congress Paul Findley has also complained about this. And, just read former AIPAC lobbyis M.J. Rosenberg regularly to get the inside scoop on how AIPAC pressures Congress, including against the president. As Graham knows, there is a whole book by John Mearsheimer and Stephen Walt about the Israel lobbies, which will soon be supplemented by further publications documenting all the … intimidation. The Israel lobbies work by threatening to give money to a rival in the next primary or election. Since races in many districts are close, and since there is no wealthy, organized lobby for the Palestinians or Arabs, it is crazy for a US politician to risk AIPAC’s ire. AIPAC doesn’t always win, and recognizing its effectiveness as a lobby is not to buy into the bigotted notion of Jews secretly controlling Gentiles. In fact, denying that the Israel lobby exists is not only willful blindness, it is itself a form of anti-Semitism, since such a denial depicts Jews as inherently unlike Cubans, Armenians, Indians, Latinos and all the other ethnic groups that lobby Congress.

The long arm of these lobbies is something about which I have a little personal experience.

Senator John McCain then attacked Hagel for having predicted that the surge or troop escalation ordered by George W. Bush would be a huge mistake. The Iraq War was fought under false pretenses (that the Saddam Hussein regime was two years from having a nuclear weapon and had big stores of biological and chemical weapons, and that it was behind the 9/11 attacks and trained al-Qaeda in the use of chemical weapons– all of these pretexts for war being wretched, bald-faced lies). The Neocons promised McCain’s committee a short inexpensive war of $60 billion, over within 6 months. Instead it turned into a quagmire that cost thousands of American lives and some 33,000 badly injured veterans who lead diminished lives. McCain was a cheerleader for the war, then a skeptic, then a cheerleader, and now he has decided that the troop escalation was a success.

If the ‘surge’ was a success, it was a minor one in a vast and pockmarked terrain of abject failure. But there are plenty of reasons to question the David Petraeus narrative of a successful surge. In Baghdad, the horrible civil war that killed tens of thousands in 2006 gradually subsided through 2007 mainly because the Shiites ethnically cleansed Sunnis from mixed neighborhoods. The US troop escalation was complicit here because it disarmed the Sunni neighborhood militias first, exposing them to night-time attacks by the still-armed Mahdi Army and Badr Corps. I have talked to Iraq vets who were on the ground and saw this process unfold with their own eyes; they say everyone knew that was what was happening. The turning of Baghdad into a largely Shiite city, while it tamped down violence, could hardly be called a big success (it had been about 50/50 Sunni and Shiite in 2002 before the Americans came).

The other element of the surge was the creation in al-Anbar Province and elsewhere of “Awakening Councils” or “Sons of Iraq,” essentially clan-based Sunni Arab militias willing to fight the Sunni-Muslim radicals who had asserted themselves in the Sunni Arab center-west of the country. Shiite prime minister Nouri al-Maliki opposed this program, which resulted in 80,000 armed Sunni militiamen, as a threat to the future public order in Iraq. After the violence began subsiding somewhat, he declined to bring more than about 9,000 of the Sons of Iraq into government security forces. The others were either cut off altogether or given small stipends. Some were hunted down and killed by the Muslim radicals, once they no longer had the protection of being in an organized unit. Some of the Sons of Iraq had been terrorists in 2005-2006, and al-Maliki refused to amnesty them, having them arrested and tried.

The big news from Iraq these days is precisely the continued discontent of Sunni Arab Iraqis, some of them (like the Abu Rishas) from families that had joined the Awakening Councils. They are demanding increased stipends for their service under Petraeus, demanding that hundreds of Sunni Arab youth arrested arbitrarily be released, demanding that the stigmatization of Sunni Arabs and the barring of them from public service be ended, and demanding that the pro-Iran, pro-Syrian, Shiite Prime Minister, Nouri al-Maliki, step down.

So the “surge” didn’t account for the decline of violence in Baghdad, and its Awakening Councils created as many problems as they solved, and created expectations that continue to roil Iraqi politics and perhaps threaten a break-up of the country.

I’d say Chuck Hagel got it about right.