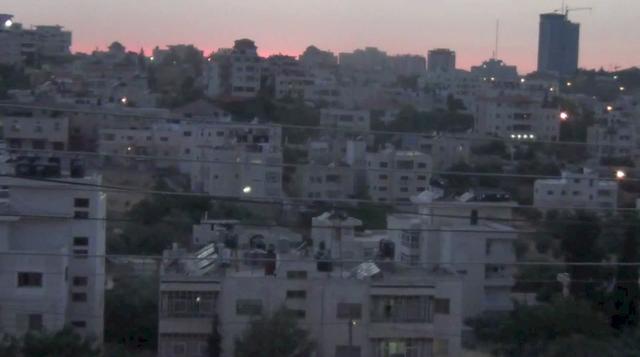 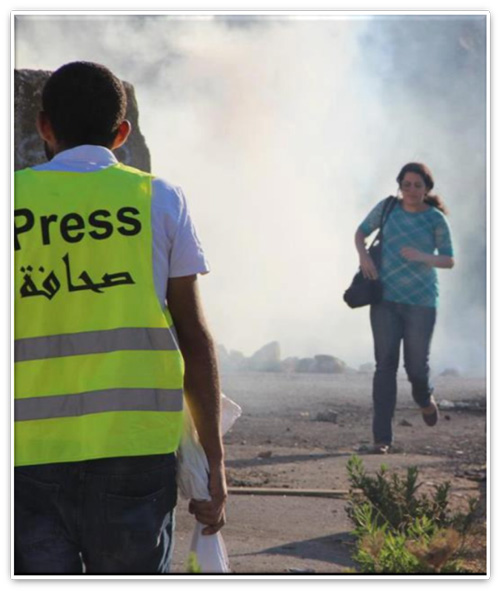 Layla Quran (pictured outside Ofer Prison, left) is a sophomore global studies major at University of North Carolina at Chapel Hill, and Palestinian-American who moved to the U.S. from Jerusalem when she was four-years-old. She spent 10 weeks in Palestine this past summer researching the impact and role of the arts on people living under military occupation, and presented her research at the NC Research Symposium last semester. Here is what she found.

Reality hit as I crossed the border between Jordan and the West Bank to begin my research last May. Crossing the border was something I had done before with my family in 1999, 2005, and 2010, but it’s a different experience each time. This summer I went with only my father.

When we were in Jordan we could move freely. When we crossed over to the West Bank I saw iron bars and iron stares everywhere. I saw less land and more people. And then, even once we were through, we could not immediately set foot in the city of my birth — Jerusalem.

(It’s as if Palestinians have nothing but time on our hands, with all the waiting we must do at checkpoints, and then even when we get through, where we can actually go is limited.)

Although I have a U.S. passport, my Palestinian passport made the application process for entrance to Jerusalem long and difficult. I was finally ‘awarded permission’ to enter Jerusalem by the Israeli government during my 9th week in Palestine.

I was not only rejected entrance twice, but I had to visit an Israeli settlement to file for a special card, contact one of the government ministries, and wait over 3 hours at a factory farm (prison-style) checkpoint before entering the city. Many, I realize, are not so fortunate to get this kind of permission.

One of the most memorable experiences last summer was my visit to the outskirts of Ofer prison in Beitunia with visual artist Ibrahim Bornat. Ibrahim takes artillery fired by the Israelis and uses it to create beautiful works of art (below photo).

As I was speaking to Ibrahim and helping him collect the canisters, a nearby Israeli jeep launched a tear gas canister that landed and broke apart just beside me.

I had not fully appreciated the beauty of fresh air until that moment. While I don’t believe it was directly aimed at me, it did land right beside me as I was walking toward Ibrahim, and I had to run through it. It only happened once, so I was lucky. I came out of the experience fine, and with an interesting story to tell my friends back in the States, but Palestinians who live there have to face this much too often. 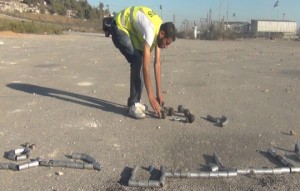 The populous city of Ramallah by far is the cultural center of the West Bank. Other cities and villages of the West Bank have little to no arts exposure. Since many Palestinians are not able to travel to Jerusalem, many arts organizations and artists have relocated to Ramallah.

Interestingly, the occupation is not the biggest obstacle for artists In Palestine, or at least for the artists I interviewed. Many say that funding is a huge problem, as the Palestinian government gives little to no money to arts and culture. This could be because the government, like some Palestinians I spoke with, sees the arts as a luxury for the elite, rather than a necessary tool of political resistance.

For many artists whom I interviewed, their art is an escape from a harsh reality.

A young musician at working for the Ramallah-based Al-Kamandjati organization — a group that makes music more available to Palestinian children, by performing at various refugee camps and even at checkpoints — told me she feels alive when she is playing her instrument.

A dancer from El-Funoun Palestinian Popular Dance Troupe told me he considers dance a window into the rest of the world.

I spoke to renowned Palestinian artist Sliman Mansour at the International Academy of Art in Al-Bireh, Palestine. I asked him why he is a political artist? He paused for a second before telling me, “I did not choose to be a political artist. I paint what I see around me.” He went on to say it would be strange for him to be living in Ramallah and painting beautiful flowers and happy people everywhere — a scene which, he says, in no way represents the situation on the ground.

In all I interviewed 50 different Palestinian artists this summer, including musicians, visual artists, dancers, actors, poets, photographers and even a Palestinian comedian. I was able to attend their concerts, dance rehearsals, plays, festivals and art exhibitions. I saw the beauty of political resistance through art, and people simply doing art just for the enjoyment of it. I felt hopeful many times, despite witnessing numerous human rights violations on the ground.

So, I wanted to share this video compilation of some of the interviews I completed this summer, called “A Masterpiece of Resistance — The Artists of Palestine.”

From Bethlehem to Jerusalem to Ramallah, I hope this shows a side of Palestine known and loved by its people living there and all over the world.