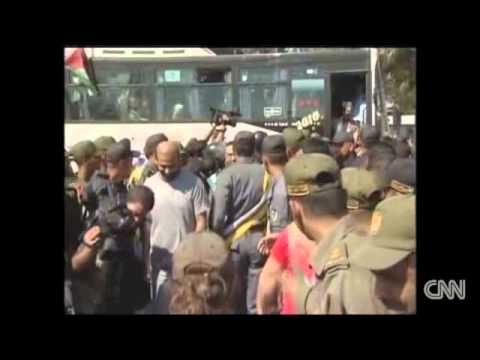 Arafat Jaradat was detained by Israeli authorities near Hebron last Monday at a protest of illegal Israeli squatting on Palestinian land. On Saturday the 30=year-old was reported dead in an Israeli jail cell. Thirty-year-old men are so healthy that the major cause of death for them is accidents, so the death is very suspicious. Palestinians rallied to protest Jaradat’s sudden demise, and thousands of Palestinian prisoners are said to have gone on hunger strike.

The Palestine issue is heating up at a time when two Oscar contenders for best documentary are shedding light on the human rights plight of the Occupied and stateless Palestinians.

Palestinians in Gaza and the West Bank have been protesting in some numbers for the last week and a half or so against arbitrary and harsh Israeli imprisonment tactics against Palestinian human rights activists. Some Palestinian prisoners have been hunger fasting, and one of those is reportedly near death.

“News of his [Jaradat’s] death comes a day after 94 Palestinians were wounded in clashes with Israeli security forces during demonstrations in the West Bank to demand the release of the four hunger-strikers. Statistics published by Israeli rights group B’Tselem show by the end of 2012, 4,500 Palestinians were being held in Israeli jails.”

CNN reports on Samer Issawi and other hunger strikers:

The USG Open Source Center translates and summarizes the reports about Palestinian protests on Friday and during the past week:

On 22 February, clashes broke out between Palestinian activists and Israeli forces in the course of processions held throughout the West Bank in solidarity with the hunger strikers in Israeli jails.

Bethlehem-based and independent Ma’an News Agency in Arabic at 1306 GMT reports that following Friday prayers clashes and confrontations broke out all over the West Bank between Israeli forces and Palestinians who were holding “peaceful” processions in solidarity with the hunger strikers in Israeli jails. According to the website, around 100 Palestinian activists performed their Friday prayers opposite the Ofer Prison, but subsequently clashes erupted with the Israeli soldiers who fired rubber-coated bullets and tear-gas grenades, causing the injury of 12 Palestinian youngsters.

Other clashes took place in the Bab al-Zawiyah area in downtown Hebron between Israeli forces and hundreds of demonstrators, as well as foreign solidarity activists who were demanding the opening of the Al-Shuhada Street.

Clashes also broke out in other parts of Hebron after Palestinians held rallies in support of the four prisoners who have gone on hunger strike. Palestinian parliamentarian Mustafa al-Barghuthi, who participated in the rallies and sustained moderate wounds, stressed that “these demonstrations send a message to the Israelis that our people will not abandon their prisoners in Israeli jails and will not let them suffer and face the risk of death all by themselves.” He further said that “popular resistance is capable of breaking the occupation’s defiance and of forcing it to stop its crimes against our people, land, and prisoners.”

For his part, Isa Amru, coordinator of the Youth Association Against Settlement Activity, accused Palestinian police of “assaulting” the protesters in Hebron and called on it to prevent Israeli troops from entering Palestinian Authority-run areas.

Ramallah WAFA in Arabic, website of the Palestine News Agency, at 1236 GMT reports that Israeli forces arrested 36-year-old citizen Adil al-Saldawi following clashes with Palestinians activists, who were holding a peaceful demonstration in support of the hunger strikers, inside the compound of the Al-Aqsa Mosque in Jerusalem. In the course of the clashes, nine Palestinians were moderately wounded.

WAFA in Arabic at 1202 GMT further reports that a number of Palestinian protesters suffered suffocation as a result of clashes with Israeli soldiers at the southern entrance of Nabulus City.