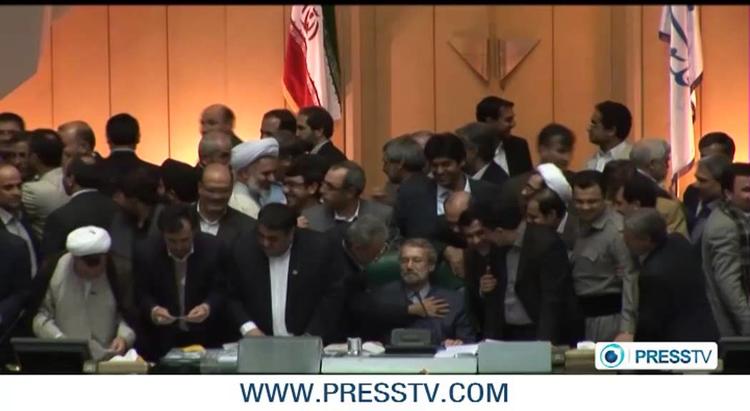 With the Iranian presidential elections only 5 months away, Iranian politics is heating up. Outgoing president Mahmoud Ahmadinejad on Sunday accused the family of the speaker of the Iranian parliament of corruption. In response, the speaker, Ali Larijani, accused the lame duck president of himself being corrupt, and of being linked to the terrorist group, the Mojahedin-e Khalq (MEK).

Not since 1981, when President Abol Hassan Bani-Sadr was chased from office, has the presidency been the focus of regime infighting to this extent.

Parliament met to vote on whether to impeach the minister of labor. He was being accused of appointing former state prosecutor Saeed Mortezavi as head of the social security administration. Parliament does not like Mortezavi because of a tragedy that occurred after he put hundreds of protesters in prison during the summer, 2009 Green movement protests against what they saw as a fixed election of Ahmadinejad to a second term. Three of those he rounded up and sent to Kahrizak prison ended up dead. Despite the country’s ambivalent feelings over the Green Movement, the deaths of the 3 protesters at Kahrizak is universally regretted. Note that the US congress has not similarly gone after persons responsible for deaths of prisoners at Guantanamo.

Ahmadinejad thought the best defense would be a good offense. So he replied to the impeachment proceedings by playing a recorded conversation between the speaker’s brother and Mortezavi, in which a corrupt deal was allegedly concluded. Ahmadinejad depicted the Larijani brothers as a sort of organized crime gang.

Ahmadinejad and Larijani have a long-running feud, so this exchange was partially about out-sized political theater.

Ahmadinejad is a populist (some similarities to Sarah Palin) and has dealt with the economic hardships imposed by the US by just giving out stipends to the people.

Larijani is a conservative, close to Ayatollah Ali Khamenei, the Supreme Leader of Iran. He is also a plausible candidate for president in elections this summer. Larijani has slammed Ahmedinejad’s policy of giving out a lot of food and other subsidies to deal with the weakening riyal as ‘Robin Hood’ politics. The conservatives have number of possible candidates in the upcoming presidential elections.

Ahmadinejad may be attempting to improve the fortunes of populist presidential candidates by attacking the speaker. Or the personal feud may have just come to a head.

Ahmadinejad cannot run again in 2013, but he has many political clients who don’t want to be sidelined by conservatives.

Meanwhile, the rial is at a new low against the dollar, making imports extremely expensive. Oil and gas exports are off some 40% of because of US sanctions. The Supreme Leader will attempt to shepherd a conservative of Larijani’s stripe to the presidency, having fallen out with the populist Ahmadinejad . The latter is trying to ensure that it isn’t Larijani himelf.

But could the reformist Green Movement benefit from the infighting?