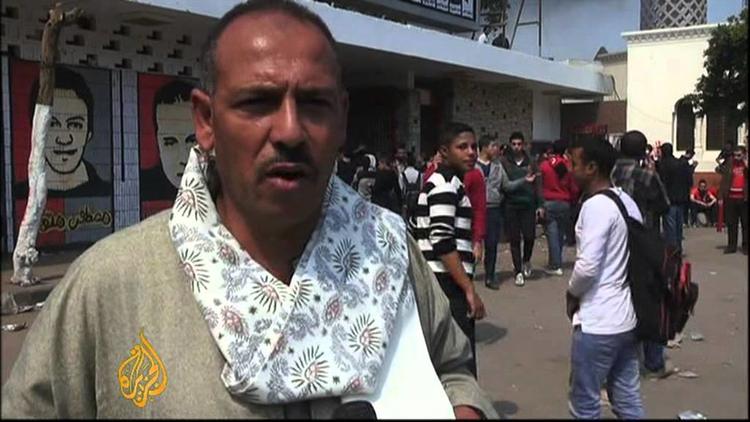 Some two thousand angry youth in Port Said attempted to block ferries and sent speedboats into the canal zone, aiming at disrupting shipping in the Suez Canal on Saturday (they failed), while in Cairo soccer ruffians angry about a court verdict set fire to the HQ of the Egyptian Soccer Federation and to a nearby police club. The new round of violence was sparked by an appeals court ruling on soccer violence from a year ago, but was wrought up with post-revolutionary passions and divisions in Egypt.

Since these events were predictable, President Muhammad Morsi’s inability to prevent the violence was seen by many observers as a sign of his weakness and lack of organization. Policing in Egypt is in crisis because many police feel unfairly treated in post-revolution Egypt, saying they are blamed for trying to keep order, and many decline any longer to do so, staying in their barracks on a kind of work slowdown. Many of these police spent years repressing the Muslim Brotherhood, which has now come to power, and so don’t have good relations with their own president.

In February of 2012, a massive soccer riot broke out at the Port Said stadium, in which more than 70 people were killed in a stampede. The ultras or soccer ruffians of the visiting al-Ahly team were known as stalwarts of the 2011 revolution against the Hosni Mubarak regime. (Soccer ruffians are always having run-ins with the police and security officials, and therefore formed a natural ally of the revolutionaries, often organizing to guard Tahrir Square.) The suspicion was that Port Said officials and the Ministry of the Interior, tied to the old regime, had paid the Green Eagle ultras who support Port Said’s al-Masri team to attack the al-Ahly fans who had come from Cairo, as a form of payback for the revolution. In essence, the Green Eagles were charged with playing the reactionary role in the Egyptian Revolution of Benedict Arnold in the American, or of the Vendee in the French.

I had personally suspected that the theory of the soccer ruffians provoking the riot and stampede as revenge on the al-Ahly ultras for the revolution was a conspiracy theory. But the Egyptian courts took it seriously. This winter, the court sentenced many of the over 70 accused Green Eagle ultras to death, and also found some security officials guilty.

In the appeals verdict that came down on Saturday, however, the police were largely let off the hook (only 2 of 9 accused were sentenced), while 21 of the death sentences were reaffirmed and 28 other accused soccer ruffians were acquitted. The result pleased no one. Port Said, which has been in virtual rebellion since the initial verdict, saw more protests at the port on the canal, as the army moved in to provide security and the police in the city were virtually decommissioned because of charges of systematic brutality against demonstrators.

Egypt Independent has a smart run-down of how the various Egyptian newspapers and political tendencies are covering the fires and violence.

Aljazeera English reports on the violence in Egypt:

The Egyptian revolution of 2011 was about many things, but aspiration for a better deal for youth, the unemployed and workers was one driver of it. That aspiration has not been met.