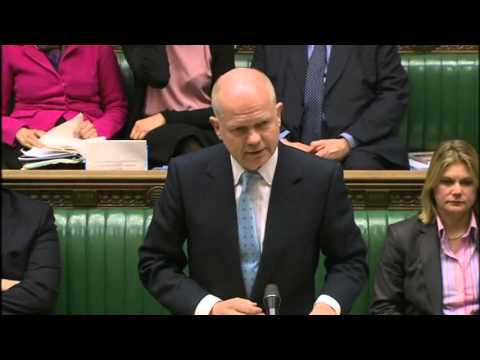 The Syrian civil war heated up on several fronts on Wednesday.

UK Foreign Secretary William Hague on Wednesday painted a horrific picture of the situation in Syria and went on to pledge armored vehicles and body armor for the Syrian rebels, as a ‘humanitarian’ measure. Russian media accuse the US, Western Europe and Jordan of setting up training camps for the Syrian rebels in Jordan. It is also rumored that Saudi Arabia is funding the Jordanian bases. It is likely that the Jordanian facilities, and Hague’s pledge of the most significant Western equipment provision yet seen, are attempts to create a southern front at Deraa, which would be anti-fundamentalist (in contrast to the main recent action in the north, where Qatar-backed fundamentalists have made the impressive gains). An excerpt from Hague’s speech:

A million Syrians have by now been made refugees by the fighting, about 1/20th of the country (equivalent to 15 million Americans suddenly left homeless). I think most people don’t realize what a refugee is. It is a role, not an identity. It is one that any of us can abruptly be forced into. Refugees had homes, they just had to flee them. They had wealth and property, they have suddenly lost it. They are homeless, and dependent on the kindness of strangers (mostly strangers are not that kind). The Syrians actually displaced from their homes are a small proportion of those who have been hurt by the fighting in some way.

Jordan’s airlines announced earlier this week that they would no longer fly to Beirut over Syrian territory, which set off speculation on the Arabic web that a decision has been made to give the rebels shoulder-held missile launchers capable of taking down aircraft (this is just speculation; and, it should be noted that they seem already to have some, which might be what Royal Jordanian Airlines is reacting against).

Meanwhile, the Arab League is moving to replace Syria’s seat in the 22-member organization with representatives of the Syrian opposition.

A group of rebels took 20 United Nations peace-keeping troops in the Golan Heights captive on Wednesday, accusing the UN of backing Syrian dictator Bashar al-Assad. (The UN Security Council has in fact neglected to condemn al-Assad’s vast violence against his own people, which has risen to the level of crimes against humanity. This failure of the UNSC, however, derives from the Russian and Chinese veto rather than from a UN preference for al-Assad in general). To have such an even occur in the Golan must alarm the Israeli leaderhip; Israel has occupied Syria’s Golan Heights since 1967.

The group circulated a video in which they demanded a withdrawal of Syrian military forces from their area and threatened to do something to the hostages in 24 hours if the regime refused.

In Raqqah, a provincial capital in the north, rebels faced heavy bombing raids by Syrian fighter jets as they continued to battle to wipe out the few pockets of resistance in the city to their conquest. There was heavy fighting on the ground against the hold-out Baathist troops. The rebels also captured the provincial governor and the provincial head of the Baath Party; these are the highest-ranking officials to fall into their hands. In another northern city, Hasakah, there were three large explosions of bombs targeting important Baathist buildings.

CNN reports on the situation in Raqqah. That the rebels (mostly in this case the fundamentalist Jabhat al-Nusra) now control almost all of Raqqah gives them one of the larger provinces of the Syrian north. Syria has 14 provinces, and the rebels now have a strong position in many parts of about half of them, mostly those in the north.