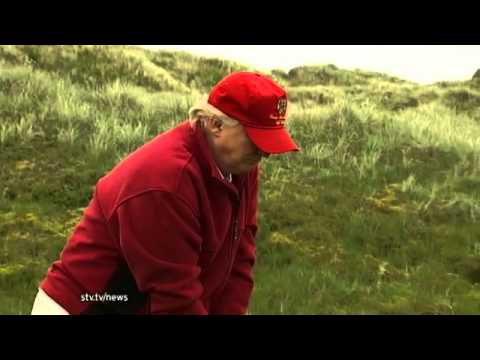 Scotland has approved 11 wind turbines in Aberdeen, which will supply have the town’s electricity. They are being touted as job-creators and engines of economic growth, and are locally popular. (Green energy has already created 11,000 jobs in Scotland and the country is rapidly increasing the amount of electricity it generates from renewables).

But Donald Trump, has plans for a golf course near Aberdeen and is threatening a law suit now that the project has been approved.

This was his address to the Scottish parliament on the subject last year:

Golf courses are expensive to play at and Trump’s would likely serve a small elite. Scotland’s admirable plans to move with lightning speed toward 100% of its energy generation from renewables, in less than a decade, is the sort of policy all the countries in the world should be adopting.

The Donald’s complaint that wind turbines are a blight on the beauty of the land is silly. There is lots of land. And, the beauty of the land won’t remain anyway if it is turned to desert or ends up under the ocean. Scotland is doing its bit to avert the catastrophe of climate change caused by dumping carbon dioxide into the atmosphere.

Trump exemplifies the selfishness and childishness of the current American business class, too many members of which are unimaginative and scientifically illiterate. If they knew what was good for them they’d be lobbying for green energy.

Dreaming of playing golf where wind energy can be generated is the contemporary equivalent of Nero fiddling while Rome burned.