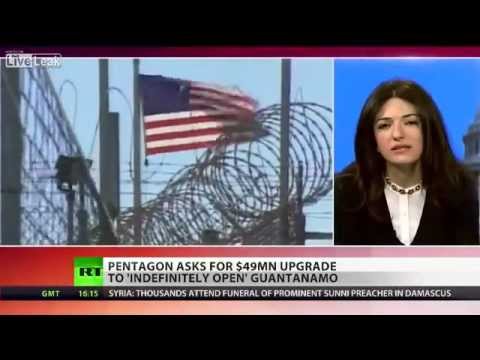 Russia Today reports on the hunger strikes among Guantanamo prisoners, 166 of whom are said still to be living in small “animal cages” and to lack any hope of ever coming to trial. They are “condemned, dead men who just happen to breathe” according to one attorney. This, despite the fact that the vast majority of remaining prisoners are “cleared for release.” Apparently the US would be willing to let them go but their home countries won’t take them?

The US constitution guarantees all prisoners the right to a speedy trial, and the phony fascist idea that non-US citizens in US custody don’t get constitutional rights is contrary to the Declaration of Independence, which says these rights belong to “all men.”

“Lt. Col Barry Wingard: The last time I saw my clients was between the February 25 and March 8. I visited with them multiple times. I was shocked at the condition they were in. In fact, we were the first people who broke the story that the hunger strike had begun around February 6 or 7 and had continued on. My client at that point had lost 26 pounds (12kg) and at this point it’s official that he’s lost almost 40 pounds (18kg) – one third of his body weight from 147 pounds (67kg).

RT: How long can they go on like that?

BW: I can imagine we’re getting near to the end when something serious is going to happen. The administration down in Guantanamo Bay initially denied the report that the hunger strike was occurring. They then said it was seven, then 14, then 21 people. They then said it wasn’t the largest hunger strike in history. Then they came out and said it’s 24, 25, and today 26 people. So the story is getting more accurate as we go, but we’re running out of time.”