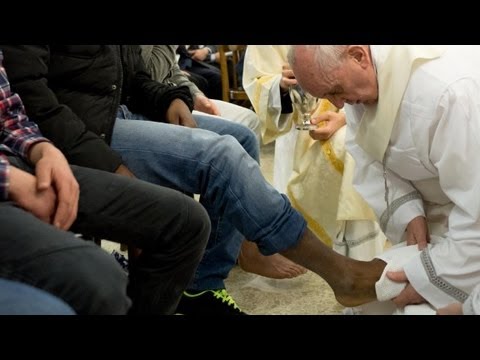 Pope Francis on Maundy Thursday declined to address enormous crowds. Instead he went to a prison to emulate Jesus’s act of humility before his crucifixion in washing the feet of his 12 disciples. The pope washed and kissed the feet of 12 inmates, two of them women and two of them Muslim (one of the women was Muslim). It is reported that some of the prisoners broke down in tears.

Pope Francis’s willingness to wash the feet of a Muslim woman shows his concern for the very lowest stratum of society. Europe has millions of Muslims, and some are well off and well integrated into society. But many Muslims who immigrated into France and Italy for work got caught when the jobs dried up, and live in poor areas of the cities, being excluded from mainstream society or much hope of betterment. Women have lower status than men in such communities, so a poor Muslim woman in jail is just about the bottom of the social scale.

Pope Francis is from Argentina, which has a large, successful Arab-heritage community that includes Muslims, and he is said to have deeply disagreed with his predecessor, Pope Benedict XVI, over the latter’s Regensburg speech in which he said things that Muslims found insulting.

The thing that strikes me about all this is that there is a small strand of American Catholic conservatism that frankly despises both the poor and Muslims, and is one of the pillars of prejudice against Muslims (some call it Islamophobia) in the United States. Most Catholics in opinion polls have a more positive view of Islam and Muslims than is common among evangelical Protestants, but the rightwingers among them have a thing about Muslims (and about poor people).

An example is former New York City mayor Rudy Giuliani. Rep. Peter King of New York also comes to mind. Robert Spencer has made a career of defaming Islam and Muslims. Then there is professional bully Sean Hannity of Faux News. Paul Ryan uses the insulting language of “Islamic fascism” (fascism is a Western invention; most fascists in history have been of Christian heritage; and it has nothing to do with the Muslim faith). Ryan, far from serving the poor, wants to cut social services to them by savaging the government budget, and openly boasts of following prophet of selfishness Ayn Rand.

These purveyors of hate speech against Muslims claim to be Catholics, and some of them are annoyingly Ultramontane, insisting on papal infallibility and trying to impose their values on all Americans.

Yet the person they hold to be the vicar of Christ has just given humankind a different charge, of humility and of service to the least in society, many of whom are Muslims.

So when will we see Rudy Giuliani, Sean Hannity and the others go to a prison to comfort inmates, and serve the Muslims among them? When will we see them kiss a Muslim’s feet? Or are they cafeteria Catholics, parading only the values that accord with their Ayn Rand heresy?