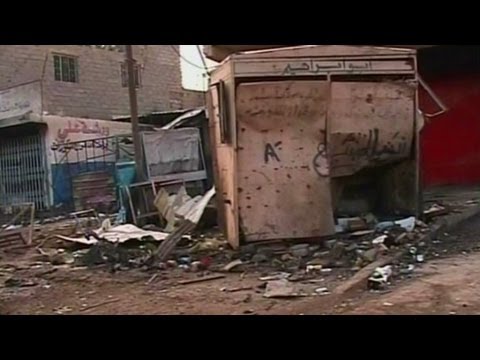 Sunni radicals hit Baghdad Tuesday morning on the anniversary of the beginning of the US war on Iraq, killing over 50 people in attacks on soft targets (shopkeepers, pedestrians) in Shiite areas of the capital. They were signaling their continued die-hard opposition to the new Iraq, which is dominated by Shiite political parties, in which Sunnis have been deeply disadvantaged. In recent months, massive crowds in Falluja, Ramadi, Mosul and other largely Sunni cities have staged an Iraqi spring protest, demanding the resignation of Prime Minister Nouri al-Maliki, whom they accuse of neglecting their interests and continuing to make large numbers of arbitrary arrests of their sons.

Arwa Damon reports on the aftermath in Iraq:

The US public was always carefully protected by its media from full knowledge of what the US government did to Iraq. The networks had a rule, of never showing blood. They almost never showed wounded Iraqis with bloody bandages. Of course, they never showed dismemberment (bodies blown up, unlike in Hollywood movies, don’t just pile up whole). Since Arabic satellite t.v. showed such images every day, the Arab world and the US saw two different wars on their screens. US media almost never interviewed Iraqi politicians (magazine shows like 60 Minutes very occasionally took up that task). Frequently, Pentagon talking points were swallowed whole. Propaganda about ‘al-Qaeda’ and Zarqawi being responsible for “80%” of the violence was used to hide from Americans that there were both Sunni and Shiite resistance movements against American occupation, and that they were Iraqis and widespread.

Many excellent reporters risked their lives to get compelling stories from American-occupied Iraq, but often appear to have faced resistance from editors back in the US. It was to the point that when I wrote one of my all-time most read pieces, “If America were like Iraq, what would it be like?” readers told me that it came as a revelation because it gave them a sense of proportion.

The US created a power vacuum and exercised a pro-Shiite favoritism in Iraq that fostered a Sunni-Shiite civil war. At its height in 2006-2007, as many as 3,000 Iraqis were being killed a month by militias. Many showed signs of acid or drilling or electrical torture. The Baghdad police had to establish a corpse patrol in the morning to collect the cadavers. How many Iraqis died as a result of the US invasion and occupation will never be known with any precision, but I think 200,000 would be the lower minimum. Since three to four times as many people are typically wounded as killed in conflict situations, that would suggest that as many as one million Iraqis were killed or wounded, some 4% of the population.

The US rounded up some 25,000 Iraqis at the height of the conflict, and their Shiite Iraqi government allies held another 25,000. The vast majority were Sunni Arabs. This 50,000 were in a vast gulag at any one time, but tens of thousands circulated through this system. Many were arbitrarily arrested, for simply being young men in the general vicinity of a bombing or other guerrilla activity. Very large numbers were tortured. US troops sometimes committed excesses. One national guard unit was known for laying down suppressive fire whenever a bomb went off in their vicinity. This tactic ensured that they killed Iraqi pedestrians after a market bombing. US troops sometimes shot drivers who did not know English and could not understand commands to slow down at checkpoints. How widespread actual atrocities were is always difficult to gauge in the fog of war. There were atrocities committed by US troops.

At the height of the conflict probably some 2.5 million Iraqis were displaced from their homes, fleeing elsewhere in the country. I’d now revise down the estimates of those displaced abroad, but likely there were at least half a million of them, and the United Nations High Commission on Refugees estimated them as more like 1.5 million. Many of these 3-4 milliion people, some 1/6 of the population, are still displaced and permanently lost their property, suffering a decline into poverty. Proportionally, it would be like 50 million Americans being forced out of their homes to take refuge in tents and slums elsewhere in the country or in Mexico or Canada.

The US destroyed the Iraqi state. It dissolved the army. It is not true as Bush apologists say, that the army was anyway gone. If they had offered soldiers money to show up at their barracks and report to their sergeants, they would have, for the most part. It still is unclear who exactly got rid of the Iraqi army and why. Jay Garner, the first proposed US viceroy in Iraq, suggested that the Bush administration was afraid that a Baathist army devoted to socialism and a strong state would get in the way of their plans for an Eastern European style “shock therapy” in the country. (One of the many motivations for the invasion of Iraq was to further destroy the socialist model for global south economies). Of course, some elite units were heavily Sunni Arab, but they could have been integrated. Instead, they were fired and sent home (it was even threatened that they would not even get pensions). Some of them joined the guerrilla resistance.

The US also destroyed the public sector, dissolving state-owned companies and creating massive unemployment, especially in Sunni provinces such as al-Anbar, which naturally emerged as among the most violent centers of resistance.

Most damaging of all, the US backed the ‘debaathification’ program championed by Shiite politicians like Ahmad Chalabi, which actually involved firing some 100,000 Sunnis from government jobs (even, often, fairly low-level ones) and then giving those jobs to members of the Shiite parties that were coming to power. As late as 2010, the debaathification commission was trying to interfere in the parliamentary elections. This massive piece of social engineering did more than anything to fan the still-burning flames of sectarianism, since it awarded material benefits on the basis of ethnic and sectarian identity. You can’t do much about your ethnic and sectarian identity. If you were punished for belonging to a party, you could change parties. But the Sunnis in particular weren’t allowed to escape their former political history (many Shiites who had been Baath Party members escaped punishment). If you’re punished for being who you are, and it is signaled that that will go on forever, then you might be tempted to turn to violence.

The vaunted ‘sons of Iraq’ or ‘awakening councils’ program that the US adopted from late 2006 involved organizing what were essentially pro-American Sunni militias to fight radical Sunnis. The Shiite government did not want these some 100,000 armed Sunnis left behind as a problem. It declined to give most of them employment as the Americans withdrew. It actually prosecuted some of them for their former guerrilla activities (before they switched teams and joined the awakening councils). Not only were they often left unemployed, but they no longer had the command of military force to protect themselves from reprisals by the radicals.

The political system the US imposed on Iraq is a one-chamber parliamentary system. It has been demonstrated by political scientists in societies with a structural minority, this system virtually guarantees frustration and violence (Sunni Arabs are probably like 18% of the population, Shiites 60%, with the rest Kurds, Turkmen and a dwindling number of Christians). Assuming Shiites can get their act together (not a foregone conclusion), they can always dominate the government. The prime minister in Iraq faces few de facto checks on power, assuming he or she can avoid a vote of no confidence. PM Nouri al-Maliki stands accused by his rivals of making the military and security forces his personal fiefdom and using them for his own purposes.

Iraq’s broken political system has what is more or less a permanent hung parliament, since the Sunnis, Kurds and two major Shiite factions can never for very long unite behind a particular prime minister. There is no relief from this political gridlock on the horizon.

The US actually stole billions from Iraqi petroleum receipts, which is illegal in international law, using it to badly administer the country and possibly just embezzling large amounts of it. More billions of US taxpayer funds also went missing. Most reconstruction efforts were poorly suited to the local conditions and most of that effort and money were wasted. Iraq needs 14 gigawatts of electricity generation but has only 9 gigs (the government keeps promising that new plants will open this year). Much of the country lacks potable water and people are forced to drink sewage. Half of the country’s physicians were forced abroad in the last decade, and many Iraqis still have to seek medical care outside the country.

The war was illegal in international law. Since the US had no-fly zones over northern and southern Iraq, likely there would have been an Iraqi spring in 2011 and the regime would have been prevented, as in Libya, by US air power from putting it down with military force. The regime would have been gone, but by the Iraqi people acting unitedly, instead of by a foreign imposition that championed one ethnic group over others. The outcome would surely have been more stable. The worst thing was, the whole nightmare was unnecessary.