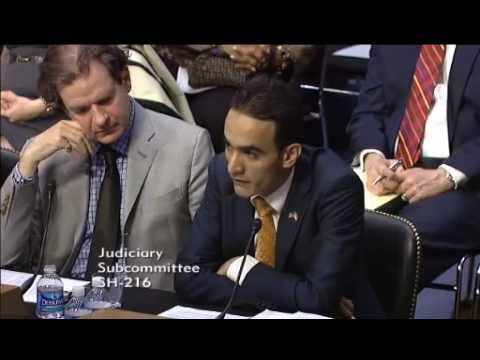 Alice K. Ross writes at the Bureau of Investigative Journalism

‘Drone strikes are the face of America to many Yemenis,’ Farea al-Muslimi told a rare US Senate hearing on targeted killing last week.

The Yemeni journalist and activist gave emotive testimony at a Senate subcommittee about the impact of drone strikes and targeted killings on his homeland. His statement was a view from beneath the strikes that is almost unique in Washington and drew some applause from the chamber.

In stark terms he described the human toll of the US’s covert campaign in Yemen, such as the aftermath of the catastrophic December 2009 cruise missile strike on al-Majala that killed over 40 civilians, including children and pregnant women. After the attack the bodies of the women and children were indistinguishable from the livestock that died alongside them, a tribesman told him.

‘Just six days ago, this so-called war came straight to my village,’ said al-Muslimi, who was educated in the US. A reported drone strike on April 18 left farmers ‘scared and angry’ and ‘tore my heart’, he added.

The presumed target of the strike, Hamdi al Radami, could easily have been arrested, al-Muslimi claimed, challenging statements by President Obama and his new CIA chief John Brennan that targeted killings are only used as a ‘last resort’, when capture is impossible.

The Senate constitutional subcommittee hearing, which heard al-Muslimi’s statement, is one of a tiny number of public examinations of the drone campaign and targeted killing to date.

As public interest in the drone issue has mounted there has been increasing pressure on the government to be more open over its use of drones and its legal justifications, and President Obama has recently pledged the administration will be more transparent over targeted killings. But the government refused to send a representative to yesterday’s hearing.

Alongside al-Muslimi, the committee heard from the Pentagon’s former number two General James Cartwright, from constitutional lawyers, and from the casualty-counting organisation New America Foundation.

Witnesses all expressed reservations about the current drone programme, and several voiced concerns at the prospect of other nations embarking on targeted killing programmes of their own.

Retired US Air Force colonel Martha McSally said oversight of targeted killing needed to be ‘tightened up’ and added: ‘There has been, I think, way too much vagueness and lack of clarity even in the information that’s come out of the chain of command relating to their legal argument and their strategy on that matter.’

But drones allowed more ‘oversight and precision’, and were more efficient than capture missions, she added, which could also risk civilian lives and took longer.

General Cartwright, the former deputy Chairman of the Joint Chiefs of Staff, told the committee, chaired by Senator Dick Durbin, that he feared the US had ‘ceded the moral authority’ through its use of drones, while law professor Rosa Brooks warned the ‘squishy’ definition of what constitutes official armed combat meant the US’s justification for targeted killing was ‘infinitely malleable’.

The hearing follows a row between Congress and the government over the government’s initial refusal to reveal its legal justifications for targeted killing to members of the Intelligence committee, even though the committee is responsible for overseeing the CIA’s activities. The issue threatened to dominate Brennan’s nomination hearings as CIA director. Durbin indicated in yesterday’s session that further government hearings are a possibility.