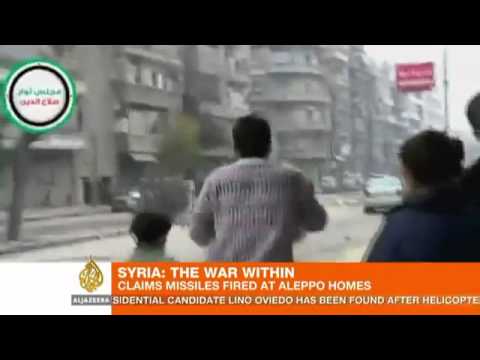 A car bomb killed at least 15 persons in downtown Damascus on Monday and wounded over 60. It is not clear if the bombing is a sign of the increased vulnerability of the capital to its guerrilla opposition or instead a sign of desperation on the part of rebels facing a massive and so far somewhat successful counter-attack by regime forces around Damascus and Aleppo.

NBCnews.com reports on the car bombing:

The USG Open Source Center translated an account from al-Quds al-Arabi of the Baath regime’s counter-offensive in the hinterlands of Damascus, necessary to protect the government’s control of Damascus International Airport, through which Iran and Russia resupply the capital with arms and ammunition. The account maintains that the regime is having a great deal of success with this campaign:

“The capital Damascus appears to be resistant to the opposition’s armed men, particularly because it is the power center of the Syrian Government. Violent clashes are currently taking place between the armed opposition militias and the Syrian Army. These clashes may be called the fifth and decisive battle for Damascus. According to observers’ estimates, the situation is in favor of the Syrian Army. This has been admitted by opposition activists on the ground who are fully knowledgeable of the developments on the ground. They do not hide the fact that the situation is difficult for the armed battalions, especially the ones that are active in Al-Mu’addamiyah, Darayya, and Al-Qadam and in most of the towns in Al-Ghutah al-Sharqiyah — Duma, Adra, Jawbar, and Barzat al-Balad. Most of the fighter brigades in these areas, including the Ahfad al-Rasul Brigade and the Al-Habib al-Mustafa Brigade, request support with weapons and fighters. The Syrian Army retook a number of strategic towns in the southeastern most part of the Damascus countryside, mainly Al-Utaybah, Harran al-Awamid, and Kafrayn. These towns pose the most serious threat to the Damascus International Airport, which will not be safe unless the regular forces control these towns. Sources on the ground say that the army has been encircling hundreds of armed men and cutting supplies to them in a number of other villages in Al-Ghutah al-Sharqiyah.”

Meanwhile, on Sunday the regime dealt a small setback to the rebels in Aleppo, retaking a village key to control of a military airport. The USG Open Source Center translated from al-Sharq al-Awsat:

” The Syrian opposition lost strategic positions in Aleppo countryside yesterday after the regular forces succeeded in seizing the village of Azizah and Jisr Assan following fierce clashes that continued throughout last week. The Syrian Observatory for Human Rights cited in its statement activists in Aleppo as saying that “the combat regiments withdrew from the village due to ammunitions shortages and intensified clashes.”

The village lies on the road leading to Al-Nayrab military airport east of Aleppo and is strategically important because it is situated on a high plateau where military forces deployed there overlook the suburbs south of the city. Azizah lies 4 km from Al-Marjah and Al-Shaykh Sa’id neighborhoods that the opposition fighters control. The “Free Syrian Army” (FSA) regiments have been seeking to capture of Al-Nayrab military airport which is considered one of the regime’s most important bases in addition to the defense factories and Al-Asad Academy.”

Aljazeera English reports on the government aerial bombardment campaign, which is causing a further exodus of Syrian refugees: