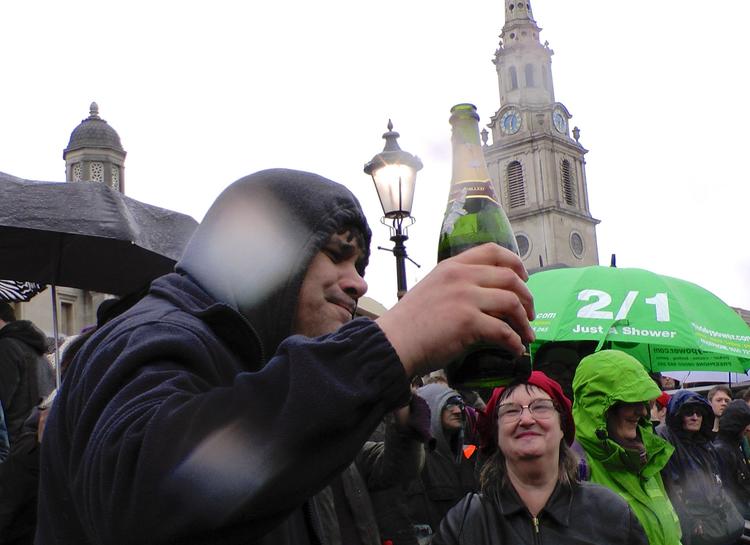 The hatred for the late Margaret Thatcher, former British prime minister, among a broad segment of the British public has manifested itself in visible and undeniable ways in the week after her death, but these are not highlighted on American television. The status quo corporate media are afraid of admitting that policy-makers who favor the rich and punish the middle and working classes are deeply hated by the latter. Dead leaders have to be represented on television as being revered by the entirety of the public (an imaginary public for which the corporate anchors can serve as ventriloquists). That many Americans despise Ronald Reagan is likewise an unmentionable on the airwaves.

Demonstrators gathered Saturday at Trafalgar Square to denounce Thatcher’s Neoliberal policies, which enriched the wealthy and harmed the middle classes, holding what they called a “death party.” Middle and working class Britons well remember how they defeated her hated poll tax and hastened her from office.

Then, Britons have been commemorating Thatcher’s death by downloading “Ding, Dong, the Witch is Dead,” in high volumes, pushing it to the top of the download charts. The British Broadcast Company was put in a difficult position, because it has a show that plays the top downloaded songs, and it didn’t want to be seen as endorsing this use of the tune. The BBC dealt with the problem by only playing an excerpt of the song, which satisfied no one.

British soccer fans for some time have been singing at the matches, “When Maggie Thatcher Dies, we’re going to have a party!” because of what they see as her dishonesty in the Hillsborough affair.