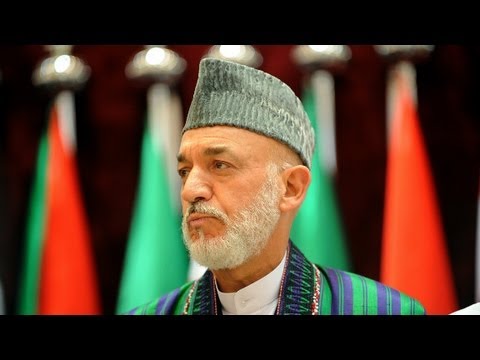 Afghanistan President Hamid Karzai on Monday confirmed an NYT report that he has been receiving cash payments in a paper bag every month from the US Central Intelligence Agency. Karzai maintained that the money actually goes to the director of national intelligence to be used for intelligence work, but the implication of the NYT article was that he is simply on the take.

What seems clear is that Hamid Karzai plays both ends against the middle, taking US money and support but publicly attempting to distance himself from the US. The latest report, of his actually being on the CIA payroll, gives the lie to this recent public announcement, translated from an Afghan newspaper by the USG Open Source Center:

The spokesman of the Afghan president has announced that Hamed Karzai is going to restrict the activities of the US Central Investigation Agency (CIA) in Afghanistan saying: “The decision has been made to prevent civilian casualties”. Lemar TV reported, quoting Emal Faizi, the president’s spokesman, that the president has decided to restrict the CIA’s activities in the country. The president’s spokesman stated that Hamed Karzai believes the main factor behind civilian casualties is the lack of coordination of the CIA’s activities in Afghanistan. According to him, President Karzai believes that illegal paramilitaries act without coordination with the Afghan institutions while reporting to the CIA.

(Description of Source: Kabul Cheragh in Dari — Independent daily paper that frequently criticizes the Afghan Government, Pakistan, and the United States, and is generally pro-Iran.) “

With Karzai, it is all Kabuki theater.