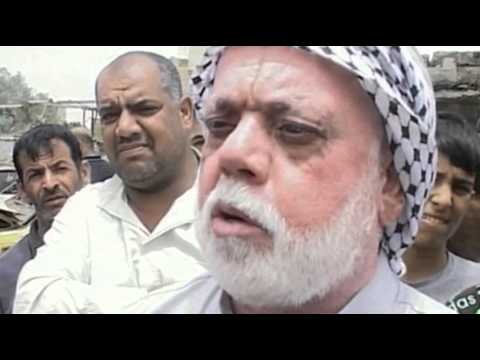 Bombings killed at least 95 people on Monday in Iraq, with 10 car bombs going off in the capital of Baghdad alone. Two car bombs were detonated in the southern Shiite port city of Basra, and the mostly Sunni city of Samarra north of the capital was also attacked. Most of the violence seems to have been aimed at Shiites.

The Sunni-Shiite violence is a legacy of the way George W. Bush and the Neoconservatives governed Iraq in 2003-2008. They deliberately installed the Shiites in power, in an exclusivist sort of way. I remember Neoconservative strategist Marc Gerecht Reuel talking about the goal of putting the Shiites in power. His colleague James Woolsey, a former CIA head, upbraided me at a conference for pointing out that some Iraqi Shiite groups are closely tied to the ayatollahs in Iran. I read somewhere that the Neoconservatives were convinced that unlike the Sunni Iraqis under Saddam Hussein, who sympathized with the Palestinians, the Shiite Iraqis as a functional minority would sympathize with Israel’s Jews. The Neocons were real cut-ups, with all kinds of fancy theories unconnected to reality.

The Americans played strong favorites for years. They avoided having a truth and reconciliation process. They castigated the Sunni Arabs, many of whom had had ties to the Baath Party (r. 1968-2003), as little short of Nazis, and encouraged the Shiites to fire thousands of them from government employment. At the same time the Americans closed down state factories and created massive unemployment. A ‘Debaathification Commission’ fired thousands of Sunni schoolteachers and brought in Shiite cronies instead.

Whereas in South Africa the truth and reconciliation commission sought truth over punishment, in Iraq the ascendant Shiites marginalized and victimized Sunnis with ties to the old Baath (or even just ties to Sunnis who had ties to . . .)

Those Sunnis who formed cells to engage in bombings and sniping to get the Americans back out, bequeathed a legacy of such cells, which remain active, now aimed at preventing the Shiite establishment that inherited Iraq from enjoying its ascendancy.

In all of Iraqi history from the Sumerians until 2003 there had never been a suicide bombing in that country. The technique was adopted to fight Bush’s occupation, having been pioneered by the Tamil Tigers in Sri Lanka.

And now, having screwed up Iraq royally over years, Americans can’t be bothered to even report on events there in more than a sentence on their television news.

I am sympathetic to attempts to contextualize such violence, but in fact such coordinated bombings have been a feature of Iraqi life for many years. The only remarkable thing about these bombings is that they came so closely on the heels of others– in recent years the big bombing campaigns have been divided by long periods of quiescence.

It is not clear that the violence is especially connected to Syria. Similar bombings were carried out before Syria slipped into civil war. And while the Iraqi military repression of Sunni Arab protesters at Hawija about a month ago, in what some Sunnis called a massacre, has inflamed Sunni-Shiite tensions, the simple fact is that before Hawija there were coordinated bombings in several cities at once. The bombings don’t appear to have a specific political aim but rather an over-all strategic one, and to take place no matter what is happening politically.

Nor is the violence of the past week (or really the last month and a half) like that during the Iraqi Civil War of 2006-2007. Then, most of those killed were victims of neighborhood faction-fighting, and most victims were shot, not killed by bombs. The neighborhood fighting declined when they were ethnically cleansed. It is not likely that that sort of civil war will start back up again now, since there has been so much movement of populations.

What can be said is that Prime Minister Nouri al-Maliki of the Shiite Islamic Mission Party (al-Da`wa) has not exactly been very good about reaching out to Sunni Iraqis and bringing them into his State of Law Coalition.

To be fair, large numbers of Sunni Arab Iraqis seem unreconciled to the rise to power of the majority Shiites, who are more or less allied with the minority Kurds. Small terrorist groups among them carry out these bombings in hopes of deterring foreign investment and of keeping the new order from congealing. They cannot really change the political situation with such bombings, but they can stop nice new buildings from being built or the kind of big increase in prosperity from being achieved that make al-Maliki truly popular.

They are having some success in this strategy. When I was in Baghdad a couple of weeks ago, I noticed that there were not many new buildings or construction sites and the city seemed in some ways frozen in 1991. Although Iraq is an oil state, it hasn’t been able to kickstart Abu Dhabi style building. (A developer has started work on a nice big new mall).

The bombers are, then, spoilers rather than revolutionaries, and they appear to have no coherent plan beyond disruption. It is a little surprising that they manage to keep at it despite having had no political impact at all for many years.

It is also surprising that al-Maliki has not been able to mount an effective counter-terrorism policy. How hard could it be to infiltrate the cells and bust them? Of course, even better would be to so mollify the general Sunni Arab population that they become willing to turn in the people making car bombs (you can’t make car bombs on an industrial scale without the neighbors noticing).

A little over ten years ago, George W. Bush gave his infamous “Mission Accomplished” speech about how permanent warfare could now be deployed in a humanitarian fashion and without substantial loss of life to build up and maintain an global American empire. Wow.