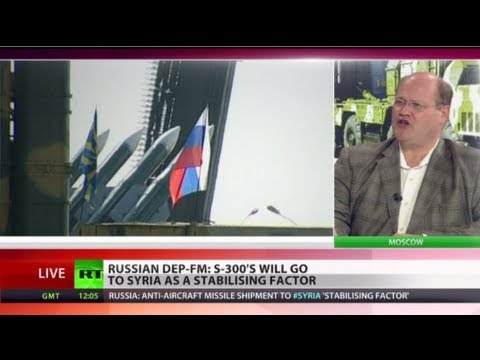 Israeli Defense Minister Moshe Yaalon bluntly threatened the Russian Federation on Tuesday, saying that if Moscow followed through on its plan to send the S-300 air defense system to Syria, Israel would bomb the arrays. Since the systems will be accompanied by Russian experts, any Israeli strike on them could well kill Russian personnel and create a crisis between nuclear states not seen since India and Pakistan played atomic chicken in 2002.

Israel is afraid that the missiles could fall into the hands of opposition forces such as the al-Qaeda-affiliated Nusra Front, and could be fired at civilian Israeli jets. They are likely also afraid that if the regime were on the verge of falling, they might be transferred to Hizbullah and so constrain Israeli freedom of movement in southern Lebanon.

At the same time, Sergei Ryabkov, the deputy foreign minister of the Russian Federation, said that the European Union’s inability to extend the ban on exporting weapons to Syria would only accelerate shipment of the S-300s.

“I can only say that we are going ahead with it. We believe that such steps go a long way to restraining some ‘hot-heads’ from exploring scenarios in which this conflict could be given an international character with participation of outside forces.”

(The European Union just failed to extend a weapons ban on Syria that was strongly supported by Sweden, Austria and the Czech Republic but opposed by France and Britain. Although the latter two have not said that they will now supply the rebels with weaponry, they may well take that step, and no longer face an impediment from the EU. Russia’s Putin is said to be angry about the change.)

In other words, as I wrote at Truthdig, Russian President Vladimir Putin is determined to shore up the Baath regime of Bashar al-Assad, and increasingly sees strengthening the latter’s air defenses as key to regime survival. Such a strengthening does not help against the rebel Free Syrian Army, which has no air force, but against any future Western plan for a no-fly zone and against Israeli air strikes (interestingly Ryabkov did not mention Israel, but its actions are clear part of what Putin is pushing back against). Putin takes a very dim view of what NATO did in Libya and is determined to prevent a repeat of that intervention against a client state of Russia. He is also concerned that Israeli air strikes on Syria could weaken the fragile government in Damascus.

Unless the Russians or the Israelis blink, they have by their rhetoric put themselves on a potential war footing.

Yaalon is an Israeli Neoconservative of sorts, who was fired as Army Chief of Staff in 2005 for opposing the Israeli withdrawal of settlements from the Gaza Strip. He later joined the far right Likud Party. He has called the Palestinians a “cancer” and said Israel had to consider killing Iranian president Mahmoud Ahmadinejad. In short, he is a bit erratic and a hothead, which is not what you would like to see in the defense minister of a nuclear-armed state.

It is hard to know how determined Moscow is on its course. Some Russian experts don’t believe that the S-300s will actually be sent, or that they can be sent before the comprehensive peace conference planned by Foreign Minister Sergei Lavrov and US Secretary of State John Kerry. Other Russian experts are pessimistic that this conference will actually get off the ground, given the disarray in rebel ranks and ambivalence of neighboring states.

But Ryabkov seems to have been signaling that Putin is determined to prevent Western or Israeli bombings of the regime, and that is the main impetus to supplying the S-300s at this time. If he is to be taken seriously, then Putin could well call Israel’s bluff. At that point, Yaalon will have to risk escalation with Russia or quietly accept that Syria is the latter’s sphere of influence, not Tel Aviv’s. Either step will represent a big change in the geopolitics of the Middle East.

Given that both Israel and Russia are nuclear states, and given the complete US backing for Israel, conflict between those two is extremely dangerous for the world and for the United States. 1973 was probably the last time the US went on nuclear alert, and it was because of the danger that the Soviet Union might intervene in the 1973 War (in which Yaalon fought, and during which Putin was just a college student–he joined the KGB in 1975).