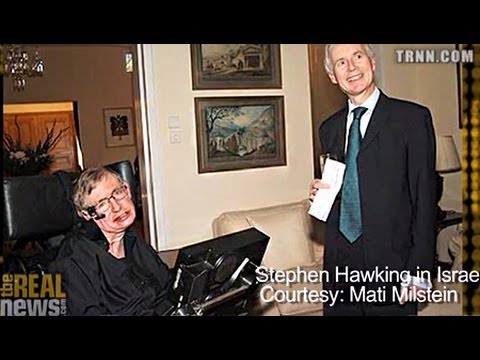 Physicist Stephen Hawking’s decision to boycott the annual President’s Conference in Jerusalem this year has been confirmed by Cambridge University. The university initially attempted to deny a political motive and said Hawkings was not going because of his health. It acknowledged the political motive when the Guardian newspaper provided it with a copy of Hawking’s May 3 withdrawal letter:

“I accepted the invitation to the Presidential Conference with the intention that this would not only allow me to express my opinion on the prospects for a peace settlement but also because it would allow me to lecture on the West Bank. However, I have received a number of emails from Palestinian academics. They are unanimous that I should respect the boycott. In view of this, I must withdraw from the conference. Had I attended, I would have stated my opinion that the policy of the present Israeli government is likely to lead to disaster.”

Phyllis Bennis at The Real News compares the impact to
the sports boycott of South Africa in the time of Apartheid.