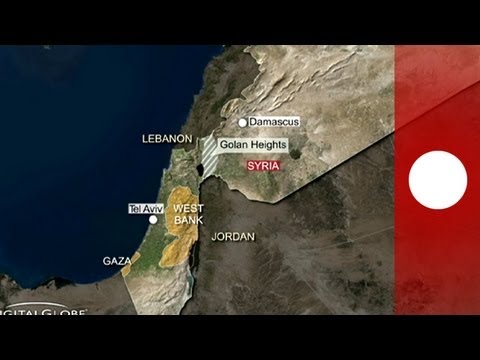 The Increasingly desperate Baath regime in Syria appears to be seeking skirmishes with Israel as a way of shoring up its nationalist credentials. If the regime were under fire from Israel, that would put the rebels in the position of acting as allies of Tel Aviv and so discrediting them. Hence, Syria’s troops fired at an Israeli jeep in the Occupied Golan Heights (Syrian territory grabbed by Israel in the 1967 war). It was the fifth such Syrian provocation in the territory. Israel’s top general warned that Syrian President Bashar al-Assad would “pay the price” if he undermined security in the area.

According to the USG Open Source Center, ‘Voice of Israel Network B in Hebrew adds at 1500 GMT that addressing a Haifa University conference, [Israeli Chief of Staff Gen. Benny] Gantz said that Syrian President Al-Asad “encourages action against Israel in the Golan Heights.” He asserted that Al-Asad will pay the price if he undermines stability in the area and that Israel will not let him to turn the Golan Heights into what he termed Al-Asad’s comfort zone. Gantz denied Syrian claims that its men destroyed an IDF jeep that had entered its territory. According to him, fire was opened several times at an IDF patrol driving along the border fence from a Syrian position, but none of the soldiers was hurt.”‘

“Incidents on Saturday and Sunday nights saw bullets fired at the vicinity of Tel Hazeqa, one of the best-known IDF outposts on the Golan Heights. The IDF believes that that gunfire was accidental, the result of battles between the rebel forces and the Syrian army. Either way, no fewer than five incidents of gunfire at the Golan Heights have been recorded since the beginning of May, more than the number of attacks out of the Gaza Strip at southern Israel communities…

That said, in the aftermath of the attack in Damascus on missiles that were earmarked for Hizballah — an attack that, according to foreign reports, was carried out by Israel — the Israeli policy of retaliation was revised, as IDF officials admit. If in the past the instructions were to retaliate to all fire out of Syrian territory, regardless of whether it was intentional or unintentional, now the army is no longer in any rush to respond with firepower, as part of the effort to reduce tensions. “We’re more cautious and are less interested in clashes,” said one military official. “That’s manifested itself in taking a step back…”