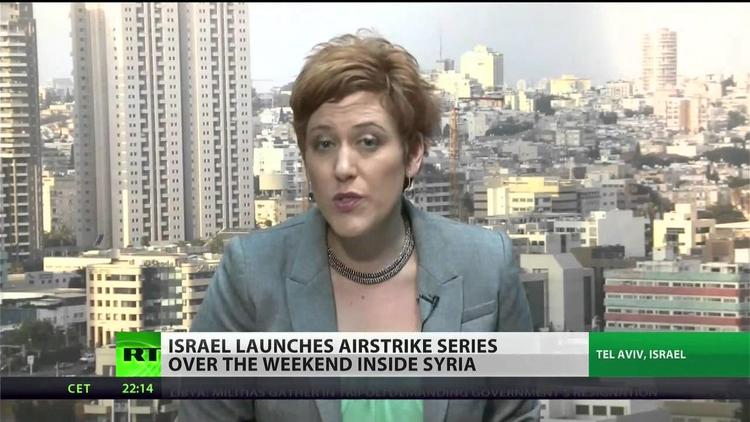 The Syrian response to Sunday’s Israeli air strike on Damascus, which killed 42, was twofold. Beleagured President Bashar al-Assad announced that soldiers manning the country’s anti-aircraft batteries may now fire at will (the Baath Party system is slow because subalterns have to ask permission for every battle action, and initiative on the ground is usually discouraged.). Translation: Civilian airliners should now stay far from Syrian airspace, lest they be mistaken by trigger happy soldiers manning the anti-aircraft batteries for Israeli jets. Al-Assad also encouraged Palestinian guerrilla groups to attack Israel from Syrian soil (this is bluster). Syrian forces appear to have lobbed mortars into the Israeli-occupied Syrian Golan Heights in reprisal on Monday.

In my view, the Israeli strikes are opportunistic and tactical, not a game changer. Tel Aviv has long been frustrated that Iran supplies munitions to lebanon’s Hizbullah through Syria, but was stymied from doing much about it by Syria’s extensive air defenses. Now Syria’s army is distracted by the civil war, and the Israelis are taking advantage. Hence the Israeli military assurance that ‘there are no winds of war’ — i.e. no larger Israeli war against Syria is in the offing.

Meanwhile, a top Iranian military official denied that the Israelis had hit an Iranian missile storage site in Damascus or that the missiles were intended for Hizbullah. He also threatened reprisals against regional powers de facto aligned with Israel against the Baath government of Syria (Turkey? Jordan? Saudi Arabia, Qatar?)

Tehran Al-Alam Television in Arabic at 1808 GMT on 5 May reported that Major General Mas’ud Jazayeri, the assistant to the Chief of Staff of the Iranian Armed Forces, has condemned the recent Israeli strikes on locations inside Syria and denied that the sites contained weapons provided from Iran.

Speaking in a 47-minute n interview with Al-Alam TV during its “From Tehran” program, Jazayeri said there was “no doubt about the Zionist entity’s aggressive trend” and added that “some countries in the region were (also) involved and one of these days will be held to account”.

Continuing to express little surprise over the strikes, he added: “We do not expect any different from Israel.”

The military official said that Israel was “intervening” in Syria and had previously “intervened in Lebanon and the Palestinian Territories, against Hamas of course.”

Speaking in Farsi with simultaneous Arabic translation, Jazayeri added that “unfortunately, there is a war between Arabs and Arabs, between Muslims and Muslims, under direction from the Americans and international Zionism”, adding that this was specifically occurring in Syria.

Asked about “Israeli and Western sources'” claims that the Syrian site targeted in Jamraya stored Iranian-made Fateh-110 missiles, Jazayeri said that the Syrian government and people currently had sufficient capability of their own “in terms of military, security, intelligence and psychological ability.”

He added that the Syrians “are not in need of Iranian weapons support, and therefore such news is denied.”

He also appeared to deny further reports that Iranian Fateh-110 missiles were supplied to Hezbollah, saying that groups such as Hamas and Hezbollah had also reached “self-sufficiency and do not need weapons from other countries.”

Jazayeri said that “the US and the other hostile countries, including some in the region, have done all they can against Syria… as well as to organize, fund and equip the opposition factions.”

He added: “Currently our region is unfortunately facing the largest kind of governmental terrorism in history”, saying that “the leader of this terrorism is the USA”.

Asked what the reaction to the strikes might be and if it may come from Hezbollah or the Syrian army, Jazayeri said that “the resistance (reference to groups such as Hezbollah and Hamas) will not allow the progression of the Zionist entity in the region”.

Answering a question about Western military exercises and mine-sweeping operations in the region, he said that “the administration of the Straight of Hormuz is in the hands of Iran and measures of this kind are made by the Americans to reassure their friends,’ and igniting what he called “Iranphobia” and “Shiitephobia”. He said the exercises included nothing new, adding that Iran was monitoring the issue and possessed “very notable information about the exercises”, while stressing that it was “a very ordinary exercise.”

Remaining on the topic of the Strait of Hormuz, he said that Iran has repeatedly announced that the Strait will remain open but that at the same time, the presence of foreign troops “has often led to tension and violations in this crucial case.”

On regional differences, Jazayeri said that in Syria “we are not seeing a war between the Sunnis and Shiites; there are groups that in reality are not Sunni, or Shiite, or even Muslim”.

More generally, he said that there were efforts to “exploit differences” between societies that came back to “sedition with a historic precedent,” saying that “the specialist in enflaming this sedition and prompting differences and tensions between states and societies is actually Britain.”

Jazayeri added that the US was now “stepping into this position,” before continuing to sharply criticize some regional states and accusing them of allying themselves with Israel and the US.