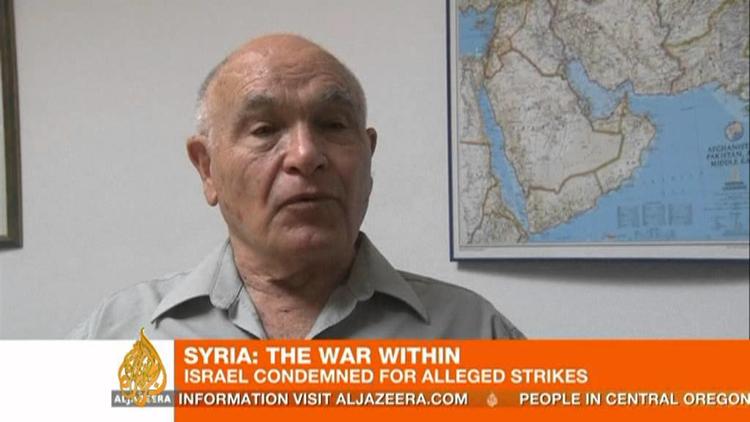 Israel and Lebanon’s Hizbullah, who fought a war in 2006, are increasingly being drawn into a proxy war in Lebanon. Hizbullah supports the Baath regime of Bashar al-Assad. The Israeli government, after a long period of neutrality, seems increasingly to have decided that the Baath must go. Israel on Sunday bombed what it said were trucks transporting missiles from Syria to Lebanon:

Aljazeera English has a report:

Meanwhile, Hizbullah stands accused of increasing its military support of the Syrian regime. It is not that the Israelis and Hizbullah are in any direct conflict, but they are gradually both becoming more active in Syria on opposite sides. It is an open question how long this process can continue before the conflict does become direct. Hizbullah fears that if it loses its Syrian land bridge with Iran, it will lose the possibility of rocket resupply. Then, its leaders fear, the Israelis will be able again to invade and annex southern Lebanon, stealing the land, water and resources of its Shiites. (Israel planned on doing to southern Lebanon what it has done to the West Bank, occupying it 1982-2000, but Hizbullah’s resistance made that too costly.)

The USG Open Sourve Center translates from the London pan-Arab daily, Al-Sharq al-Awsat, for May 5:

As the shelling of the Jawbar, Barzah, and Al-Yarmuk Camp neighborhoods of Damascus resumed yesterday, a large part of the suspended bridge in Dayr-al-Zawr province, east of Syria, collapsed when an explosive device went off. Also, Al-Bayda in Rif Baniyas was the scene of fighting and tank shelling.

According to the Syrian Revolution General Commission (SRGC), the ongoing fighting in various Syrian provinces has continued, as two people were killed and several others were wounded by shells fired by Lebanese Hizballah fighters in the farm areas around Al-Qusayr, in Rif Homs. A The same SRGC sources also said the (regime’s) warplanes carried out a number of raids on Al-Buwaydah al-Sharqiyah and Al-Salumiyah in the south of RifA Homs, setting fire to many farm areas.

Sham News network reported that the regime forces have used heavy artillery to shell a number of neighborhoods of Homs, including Bab-al-Durayb, Al-Qusur, and Al-Khalidiyah, killing or wounding a number of people and destroying a large part of the infrastructure as well as government offices.

The Syrian Observatory for Human Rights (SOHR) confirmed that Iranian officers and Hizballah elements, supported by elements of the so-called National Defense Forces, are involved in the control of a large part of the Wadi-al-Sayih neighborhood, which will “enable the regular army to isolate the besieged old neighborhoods of Homs from the besieged Al-Khalidiyah neighborhood.”

SOHR Director Rami Abd-al-Rahman said, in a contact with Al-Sharq al-Awsat, “Iranian and Hizballah officers are running the operations room in the battle for Homs and are controlling the army operations in the city, particularly the street battles.” He warned of “massacres against the Sunni community living in the besieged areas if the army captures these areas.”A The SOHR believes that the aim of the current campaign is to tighten the siege around these areas and bring them under control before pointing out that “the lives of about 800 families, who have been under siege for nearly a year now, including the lives of hundreds of wounded people, will be at serious risk from sectarian revenge if these areas fall.”

The SOHR described last month (April) as “the worst month, as far as death under torture and children’s deaths are concerned.” A In its monthly bulletin, the SOHR gave the death toll in Syria as “3,313 citizens shot dead by the regular forces, that is, an average of 138 people per day,A at the rate of six citizens per hour.A Moreover, 377 children were killed, that is 13 children per day; and 176 were killed under torture, at the rate of six people per day.”