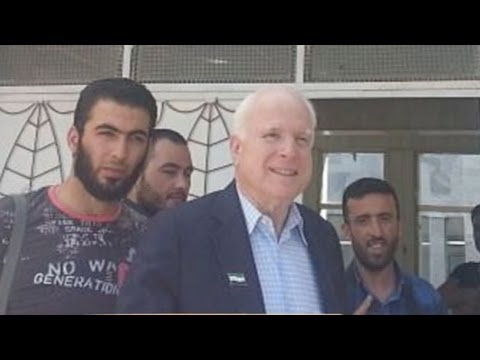 Lauren Williams of The Daily Star (Beirut) reported that when Sen. John McCain made a visit to rebel-held northern Syria on Monday, one of his photo ops was with a man implicated in the kidnapping of 11 Lebanese Shiite religious pilgrims, 9 of whom are still being held.

The report provoked controversy because it undermined McCain’s confident assertion that the US could identify “vetted” moderates to whom it could confidently supply medium and heavy weaponry.

“The pilgrims were kidnapped by armed rebels in Azaz, in Syria’s Aleppo province, in May last year as they were making their way back to Lebanon from Iran.

Two of the kidnapped, Anwar Ibrahim and Hussein Ali Omar were released in August and September but intense negotiations are still underway for the remaining nine, believed to be in the custody of the “Northern Storm” brigade, headed by rebel commander Ammar Al-Dadikhi, aka Abu Ibrahim… According to families of the remaining captives and one of the released men, Anwar Ibrahim, one of the men standing alongside McCain in photographs released by the senator’s office, is Mohammad Nour, the chief spokesman and photographer for the Northern Storm kidnappers. Nour appears in several shots where McCain is posing with different officials.

Ibrahim and other members of the kidnapped family said they recognized Nour, and another man affiliated with the group, also identified as “Abu Ibrahim,” immediately after seeing the photos, widely circulated by international media following McCain’s visit.

Ibrahim, who had seen Nour multiple times in person during his captivity, said he was a close affiliate of Dadikhi who had photographed him and his fellow captors during the media campaign surrounding his kidnap. Nour has also acted as the spokesman for the kidnappers.”

McCain’s office denied that the senator knowingly met with kidnappers. Syrian oppositionists tried to throw cold water on the Daily Star report as ‘Iranian propaganda,’ but the article wasn’t written by an Iranian and the denials lacked the detail that made the original report plausible.

Responsibility for taking the Lebanese pilgrims was originally claimed last summer by a group called “Syrian Revolutionaries – Aleppo Hinterland”. Its spokesman said that the kidnapping was in reprisal for Syrian Alawite death squads’ attack on the Sunni village of Houla. (The Lebanese pilgrims belong to the Twelver branch of Shiism, and are not Alawis. It would be like kidnapping Methodists to take revenge on Wiccans.)

The idea that once weapons are supplied to a rebel group, they will stay within that group, is daft and runs contrary to everything we have seen in Afghanistan, Iraq and other theaters flooded with weapons by the US and its allies. In Iraq, even government troops sold off their weaponry on the black market for a quick profit. Whereas militiamen armed only with semi-automatic firearms can be demobilized after the conflict, if they have medium or heavy weaponry, they become king-makers and dictate to the government or they mark out territory that they control, where the government is doomed to be weak and challenged, for decades. (Much of Afghanistan is still in the hands of warlord families trained and equipped by the CIA in the 1980s during the fight against the Soviet Union).

The rebels want anti-aircraft batteries, shoulder-held heat-seeking missiles, and tank-killing artillery and anti-tank mines. These are powerful weapons and will bestow a political veto on the groups that possess them.

The Baath regime in Damascus has committed crimes against humanity and deserves to be removed from power. But trying to accomplish that goal by putting powerful weaponry in the hands of a congeries of local militias, some of them radical, is attended by severe dangers for a future Syria and for Syria’s neighbors today.