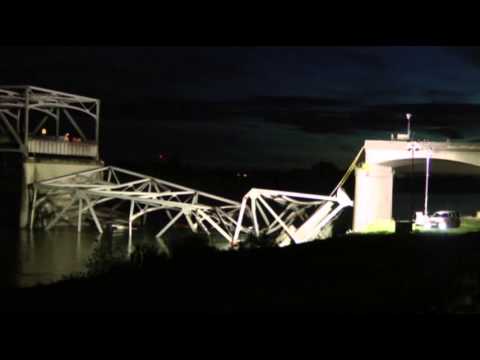 The next time you hear politicians campaigning on “lower taxes,” you should realize two things.

First, they don’t intend to lower your taxes, which are probably mostly social security. In fact, they might like effectively to raise those taxes by extending the retirement age. They mean they intend to lower taxes for rich people and corporations.

Second, what they really mean is that they intend to deny you basic social services of the sort government provides through your taxes, such as upkeep of roads and bridges. They want to allow the trucking and other corporations who use those resources to escape paying for them (most road degradation is caused by trucks), and pass the cost on to you, either in the form of tolls or of deteriorating infrastructure. I.e., when they campaign on lower taxes they are actually promising you that your bridges will collapse. Like the one in Washington state.

12% of bridges –i.e. thousands and thousands of them– in the United States are “structurally deficient.”

“An I-5 bridge over the Skagit River in Mount Vernon[, Washington,] collapsed Thursday evening, sending cars and people into the water. Three people were rescued from the water and taken to hospitals.”

The implications for other states: