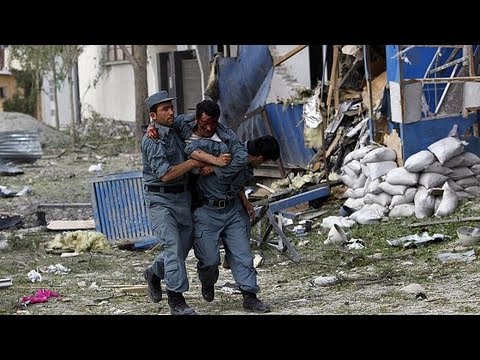 The Taliban launched a major attack in the capital of Kabul on Friday, injuring 7 people with a car bomb at the International office of Immigration, a UN-affiliated organization. In the firefight between the attackers and the Afghanistan military (which was aided by Norwegian troops), 7 persons were killed, including 5 4 Taliban and three bystanders.

The USG Open Source Center translates a Pashto report issued as the incident was unfolding by the Afghan Islamic Press news service:

Kabul: At least five explosions have taken place and fighting is going on in Kabul city.

At least five heavy explosions took place in the 5th Police Station in Kabul city where fighting is under way now in which three people were killed and some others wounded.

A security official in Kabul city, who did not want to be named, told Afghan Islamic Press (AIP) that a heavy explosion took place in the Qowaye Markaz area of the 4th Police Station in Kabul city at 1600 (local time) today, 24 May, and gunmen began attacking government offices.

He added that at least three more explosions took place after the first one and it seemed suicide bombers carried out the explosions.

He also said that they have so far received reports on the death of two police officers and one civilian and the wounding of some other people, but they do not have further information about casualties.

He also reported that five explosions took place in the area and smoke was coming out of an embassy as well.

Security officials said that a few suicide bombers equipped with weapons entered a building in the area and began fighting.

The Taleban claimed responsibility for these attacks and their spokesman, Zabihollah Mojahed, told AIP that the attacks targeted the National Directorate of Security and foreign offices.

He added: “First one fighter attacked a guesthouse – where foreign trainers of personnel of the National Directorate of Security come to have food, change and rest – with an explosive-packed vehicle. After the barrier was removed, some other mojahedin equipped with heavy and light weapons entered the guesthouse and buildings around it and began attacks.”

The Taleban spokesman said that fighting is under way now, but they do not have accurate information about it.

It is worth pointing out that the Taleban spokesman told AIP in an interview three days ago, 21 May, that they were plan to carry out heavy attacks and soon these plans would be implemented.

(Description of Source: Peshawar Afghan Islamic Press in Pashto — Peshawar-based agency, staffed by Afghans, that describes itself as an independent “news agency” but whose history and reporting pattern reveal a perceptible pro-Taliban bias; the AIP’s founder-director, Mohammad Yaqub Sharafat, has long been associated with a mujahidin faction that merged with the Taliban’s “Islamic Emirate” led by Mullah Omar; subscription required to access content; URL: www.afghanislamicpress.com)”