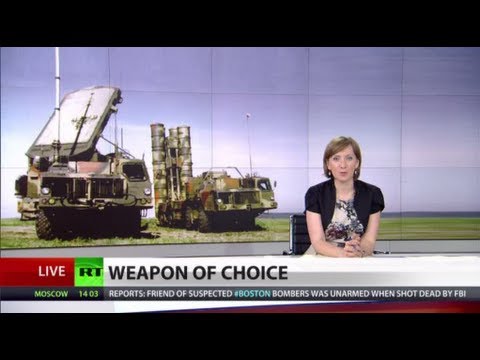 Secretary of State John Kerry on Friday deplored the Russian plan to ship S-300 anti-aircraft systems to Syria, saying that it will not lead to peace. The batteries would constrain Israel from bombarding targets in Syria and so would be a game-changer for Israeli security, and they would likely put paid to any talk of a NATO no-fly zone over Syria a la Libya. Russia seems determined to follow through, however (see below).

There is a controversy about whether any of the systems has already been delivered; Syrian President Bashar al-Assad said in an interview that one had, but many observers discount this claim.

And here is a video showing S-300s in action:

The USG Open Source Center translates an article from a Russian military source. The article has some interesting details on the S-300’s capabilities and asserts that Syrian crews could be trained within a month.

“Syria to need up to a dozen S-300 batteries to protect itself – Russian general
Interfax-AVN Online
Friday, May 31, 2013
Document Type: OSC Summary . . .

“Based on the size of Syria’s territory, they will need 10-12 S-300 battalions (Russian: “divizion”; strictly, the next force level up from a battery, i.e. battalion), which would see to it that the country is protected,” Kornukov said.

“According to him, that kind of potential will make it all but impossible to set up a no-fly zone over Syria,” the report said.

“Each S-300 surface-to-air missile (SAM) system consists of a command post equipped with radar for detection and up to six 5Zh15 SAMs linked up with it,” the report added.

A month to train Syrian crews

It will take up to a month to train Syrian crews to operate the S-300, Kornukov told Interfax-AVN. “Certainly, our specialists will have to train Syrian colleagues if they get these systems. Everything here will depend on the diligence of those to be trained. It will, however, take between two weeks and a month,” Kornukov said.

Asked how long it would take to deploy the S-300 once in Syria, Kornukov said that “everything depends on the site where these systems are to be positioned”. “It will take some time to reach the site, although to deploy them proper will take no more than a couple of hours,” he said. It is, he noted, a conservative estimate to take account of the need for “additional adjustments after transit”. “Ordinarily, however, our systems can be deployed within five minutes,” Kornukov added.

No electronic warfare system in the world can suppress the S-300 completely, Kornukov also told Interfax-AVN.

“As far as protection from electronic countermeasures is concerned, we have not yet tested the S-300 in a combat environment,” Kornukov admitted. He went on to recall an occasion when countermeasures were deployed by “our Bering Strait neighbours”, which, however, did not prevent the success of that particular combat training mission.

It would, however, be wrong to say that the S-300 is totally immune to electronic countermeasures, Kornukov also said. “There are electronic warfare systems, including ours, that can affect its combat operation,” he said. A “smart commander”, however, can find a way round and still hit his target.

“Kornukov, however, declined to explain exactly how the S-300 could resist suppression by electronic countermeasures,” the Interfax-AVN report added.