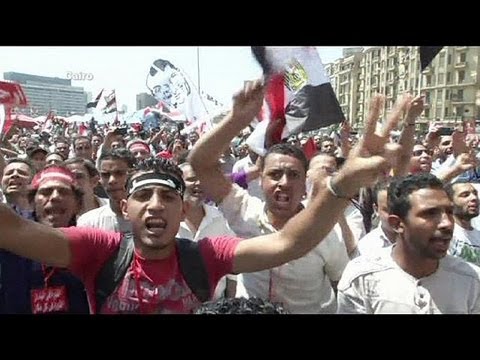 Tens of thousands of leftist, liberal and centrist protesters gathered in Tahrir Square on Friday for “The Last Warning” aimed at President Muhammad Morsi of the Brotherhood. Morsi has ruled Egypt for the past year, after winning the presidential election in June of 2012. He has made a series of arrogant and polarizing policy decisions that have so angered the activist youth who led the January 25, 2011, revolution, that they are now calling upon him to hold early further presidential elections. Morsi and his supporters maintain that he was elected to a regular 4-year term, but the youth movements believe he has squandered his mandate and should step down.

At the same time his opponents were gathered in Tahrir, Morsi’s supporters (most of them bussed into the capital from villages in the countryside) were gathered in Nasr City miles away, also in their tens of thousands.

The two big crowds in different parts of Cairo were relatively well-behaved, but elsewhere in the country there were many clashes, attacks, arson attempts, over 200 injuries, and even three murders, one of an American undergraduate in Alexandria. The young man, from Kenyon College, was teaching English for the summer in Egypt’s second city, and appears to have been taking photos near the Muslim Brotherhood HQ with his mobile phone when he was approached, asked his nationality, and then knifed to death. The US embassy has gone to a skeleton crew and issued a travel advisory against going to Egypt.

It isn’t yet clear why he was targeted, but it has all along been dangerous to openly take pictures during demonstrations, and many Westerners have been attacked and had their equipment broken or confiscated during such photo sessions. The United States has become unpopular in Egypt in part because Ambassador Anne Patterson asked for the June 30 demonstrations to be called off, and because she is (unfairly) perceived as favoring the Muslim Brotherhood. Some leftists in the Arab world have a conspiracy that Washington is installing Muslim Fundamentalists in power so as to appease them and reduce the threat from al-Qaeda. In fact, Washington would much rather the fundamentalists didn’t come to power. The Obama administration, however, is wise enough to negotiate with all major political forces in Egypt and to deal pragmatically with a Muslim Brotherhood president.

In Upper Egypt, protesters blocked the trunk road at El Fayyoum, demanding that Morsi step down. (The metalled road south is key to essential truck traffic tying Upper Egypt to the capital).

In al-Mahalla al-Kubra, factory workers supported the June 30 demonstration, and in the southern province of El Minya, activists said Sunday would bring to an end “The imperialism of the Muslim Brotherhood.” (The Brotherhood’s policies are oriented to the business community and against labor, since many Brothers were excluded from the public sector by the Mubarak government and so were forced to become entrepreneurs. It is that class of private business people that bankroll Brotherhood electoral campaigns.

In Luxor a broad range of parties and activists came together to plan for demonstrations Sunday. Morsi shot himself in the foot there by trying to appoint a member of al-Gama’a al-Islamiya as governor. That group has turned to peaceful politics but in 1997 it was involved in an attack on tourists in Luxor, and locals are not ready to forgive it.

In Alexandria protesters gathered outside the Muslim Brotherhood HQ, and one of the Brothers shot at them with birdshot, after which they invaded the building. In a number of Delta towns, Brotherhood offices were invaded or burned.