A key was the symbol of Hassan Rowhani’s presidential campaign, but what, if any, doors to real power will it unlock?

“This is the victory of wisdom, a victory of moderation and a victory of commitment over extremism,” Iranian president-elect Hassan Rowhani declared on TV shortly after election results were announced.

Rowhani means clergy in Persian, and he was the only cleric among the eight candidates approved by the Guardian Council to run in the presidential election held June 14, 2013. He wasted no time in thanking God for his victory – “that once again rationality and moderation has shined on Iran.”

Rowhani, 65, who’s also a lawyer, is neither a reformist nor a hardliner. He is a moderate conservative who’s close to former president Hashemi Rafsanjani and loyal to Iran’s Leader *Mr. Ali Khamene’i.

Rowhani has been a member of the central board of the Combatant Clergy Association for more than three decades. This political party, together with the Association of Teachers of Qom Seminary, was the major organization of Islamic conservatism and the main supporter of the religious authority of Khamene’i. 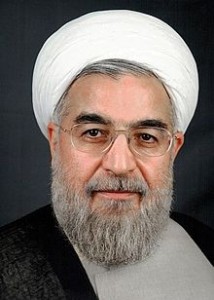 Khamene’i, the second leader of the Islamic Republic of Iran, appointed Rowhani as his representative to the Supreme National Security Council and he still holds this important position. Rowhani served as secretary of the Supreme National Security Council of Iran (SNSC) under President Hashemi Rafsanjani during the Iran’s eight-year war with Iraq (1980-88), and also served as Rafsanjani’s top national security advisor from 1989-97. He continued to serve as secretary to the SNSC through the administrations of Rafsanjani and Mohammad Khatami, and also, as secretary, held the dual role as Iran’s top nuclear negotiator. In August 2005, following the election of Mahmoud Ahmadinejad as president, Rowhani resigned his post after 16 years of service. Ali Larijani succeeded him and was then replaced by Sa’id Jalili in 2007.

In this past election former president Rafsanjani was disqualified by the Guardian Council, and really by the Leader, because he supported the opposition Green Movement. Rowhani did NOT.

Earlier polling had shown that the election was likely to go on to the second round with a run-off between Qalibaf, and Jalili (or Rezaa’i). The prevailing wind shifted, however, following the third TV debate, about politics, that aired a week before the election. In the debate Rowhani strongly challenged Jalili and Ghalibaf on nuclear policy, foreign affairs, and student protests.

Jalili has a strong base of support from the paramilitary volunteer militia — the Basij — while most Revolutionary Guard commanders support Qalibaf. The Iranian middle class including moderate conservatives, many reformists, and a part of Green Movement, especially youth, cast their votes for Rowhani.

They found him the best-qualified candidate, especially after the withdrawal of the reformist ‘Aref. Citizen support for former presidents Khatami and Rafsanjani (neither of which ran in this election) also played an influential role in the victory of Rowhani.

The Leader (Khamene’i) did not expect any of the candidates to get 50% of the votes in the first round — believing he would have enough time to influence the outcome of the second round — but, ultimately, he did not cheat and accepted the votes of the electorate this time.

Rafsanjani and Mehdi Karroubi wrote open letters that the 2005 presidential election was a fraud. Reformists Mir-Hossein Mousavi and Karroubi, two candidates who ran in the 2008 presidential election, have been under house arrest since Feb. 2010 without trial — for claiming that the 2008 election was fraudulent. These reformists, Rafsanjani included, cast doubt on the very legitimacy of Ahmadinejad’s election as president.

Since Iranian citizens tend to pin fraudulent elections on the Leader and his men, the Leader needed to repair his lost legitimacy in the court of public opinion this time around. He frankly said ‘the country needs your votes’ and that if anyone does not believe in the regime, they may vote in order to protect the country – “each of your votes is a vote for the Islamic Republic.”

This election was the first time that the Leader accepted that some Iranians do not believe in him and he actually invited them to vote. Votes cast for Rowhani were votes of NO to fundamentalism, NO to radicalism, NO to administration of Ahmadinejad and somehow NO to the Leader’s policy.

Most Iranians are happy with the election results. They think that they won the fight against fundamentalism and radicalism. The Leader is also almost happy because he believes he has restored his damaged legitimacy. And actually, Rowhani’s win is a small step forward for the Green Movement in what is shaping up to be a very slow, step-by-step process.

Rowhani’s economic and foreign policy positions appear to be the same as Rafsanjani’s. He does not want to engage in any new struggle with the West, and wants to improve relations with the U.S. He supports the free market. He is trying to resolve the nuclear stand-off, bring an end to sanctions and repair the sick economy of Iran. His time in office will be better for the country than it was under Ahmadinejad.

A big question mark, however, hangs over the future of human rights, democracy and freedom in Iran. The dictatorship of Khamene’i is the main obstacle. There is no room for an independent president or an independent parliament in the office of this Leader. The theocracy of Guardianship of Jurist (wilayat al-faqih) also prevents this. As the Persian saying goes, you cannot have two Kings in one country. So it should not come as a surprise that all living Iranian ex-presidents (Abulhassan Bani-Sadr, Rafsanjani, Khatami and also Ahmadinejad) now are among the opposition. Khamene’i needs a servant not a president.

Rowhani, until now, was not a man to oppose the Leader. Will he change his mind, while president, and shift to the side of the citizens who voted him in? It is possible. And we should not forget that the Leader, Khamene’i, has learned a few things (not many!) from the Green Movement. I hope so. Let’s wait a couple months.

It is not legal, but that’s the way it’s been done for three decades. The president has only 20% of power in the Islamic Republic. The parliament has less than 20%. And more than 60% of the power is legally in the hands of the Leader, though he has tried, illegally, to grab for more. I am not so optimistic about Rowhani’s role in decreasing the power of this Iranian dictatorship.

* intentional use by the author of Mr. not Ayatollah, and Leader not Supreme Leader

Mohsen Kadivar is Visiting Research Professor of Islamic Studies at Duke University, an Iranian dissident in exile since 2008, and a global ethics fellow with the Carnegie Council for Ethics in International Affairs. He was sentenced to 18 months in prison in Iran in 1999 because of his political criticism of the Islamic Republic, and was released in July 2000. He remains active in the opposition Green Movement. He is also core faculty with the Duke Islamic Studies Center. His personal website is http://en.kadivar.com. Kadivar’s latest publication in English is Revisiting Women’s Rights in Islam: ‘Egalitarian Justice in Lieu of Deserts-Based Justice’, a chapter in Gender and Equality in Muslim Family Law (I.B. TAURIS, May 28, 2013, Edited by: Lena Larsen, Ziba Mir-Hosseini, Christian Moe, Kari Vogt)