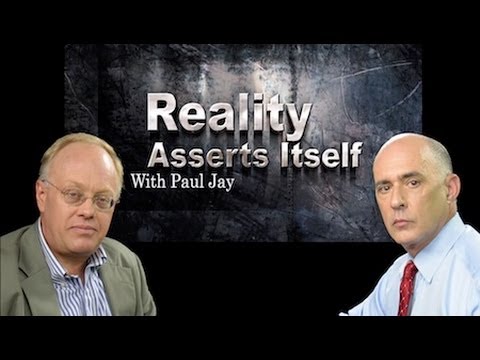 Excerpt of the transcript:

“JAY: But, see, that’s what I’m concerned about as a citizen, I mean, whatever the journalist hat is supposed to be here, which is–. I was at dinner the other night with some people having somewhat similar conversation, why isn’t there a mass movement and all of this, and I was saying, be careful what you wish for. You know. If there was a big explosion tomorrow, you know, would any progressive force actually be ready for it? Because it could easily, as you said in an earlier episode, a segment of the interview, you know, the right could grab hold of this as well.

HEDGES: Well, right-wing populism or fascism is a very real possibility. And I think that we are particularly vulnerable to that because our progressive populist and radical movements virtually don’t exist, and because the liberal center is so discredited. If you go back and read Dostoevsky Notes from Underground, Demons, Dostoevsky was obsessed–I mean, that’s what Notes from Underground is about–with a liberal class that is superfluous, that no longer has any actual authority or power within the society and has become a joke.

I saw the same thing in the breakdown of Yugoslavia, which I covered as a correspondent, where you had a liberal center that in essence is paralyzed. It can’t respond. And that’s what’s happened. We have a system of political paralysis that responds only to the dictates of the corporate elite, not to the needs and the rights of the citizenry.

And so when you have the figures like Obama who continue to speak in that traditional language of liberalism and yet cannot respond to chronic unemployment, underemployment, you know, foreclosures, bank repossessions, and everything else, and in fact are running a system where the assaults against the underclass are only getting worse, then what happens is there becomes a deep disdain for not only liberal ideology but traditional liberal institutions–you saw the same thing in Weimar–so that when there is an uprising, oftentimes people want nothing to do with not only liberal elites, but the supposed liberal values, quote-unquote, that these elites were purportedly espousing.

And that is a very real danger, because when you have figures like Obama that present themselves as traditional liberals and yet are unable to be effective in terms of dealing with the suffering and the misery of the underclass, that–and this is what happened in Yugoslavia–that when things exploded, you vomited up these very frightening figures–Radovan Karadzic, Slobodan Milosevic, Franjo Tudman–in the same way that the breakdown in Weimar vomited up the Nazi Party. And that’s what frightens me, because we don’t have the movements, the populist movements on the left, and because we live in a system of political paralysis.

So Dostoevsky said that, you know, that system leads to what he calls an age of moral nihilism, and ultimately violence, which is what at the end of Crime and Punishment Raskolnikov’s dream is about. So–and Dostoyevsky was nothing if not deeply prescient about where that was going… ”