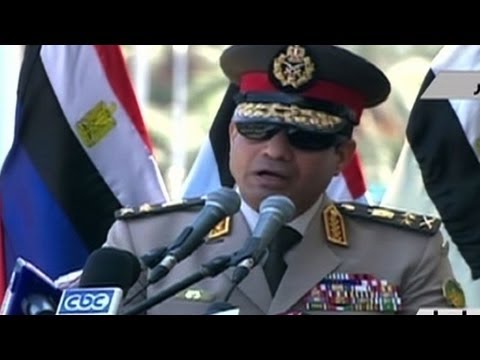 Here are two videos from AFP that help explain all those people milling in the street today in Egypt.

Gen. Abdel Fattah al-Sisi, the Minister of Defense, called for big demonstrations on Friday so that that people can “delegate” to the military the ability to wage a “war on terror.” The use of that language came after a state security police building was bombed in Mansoura. I tweeted that when activists call for demonstrations, that is activism; when generals do, that is Peronism. Al-Sisi gave the Muslim Brotherhood 48 hours to sign on to the national road map to the future (new constitution, new elections). I also tweeted that in history, giving the opposing side a 48 hour ultimatum is often a prelude to war.

Al-Sisi is playing with fire by ensuring that dueling crowds will be out on Friday, and they could clash. To their credit, some liberal political parties and youth movements like April 6 and the Revolutionary Socialists have announced that they will not participate. The Muslim Brotherhood pledged counter-demonstrations in favor of deposed President Muhammad Morsi.

AFP has video and a translation of some of al-Sisi’s speech:

AFP also has the Muslim Brotherhood response with English trans. :