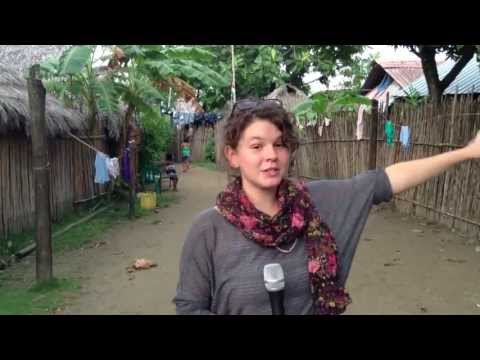 The indigenous community of the Guna (Kuna) live on islands off Panama and along a narrow strip of its coast, in the province of Guna Yala (Kuna Yala). But global warming and sea level rise are threatening their lives on those islands, and those of Carti Sugdup (Gardi Sugdup) have decided that they have to move to the mainland.

Scientists are now estimating that there will be 7 feet of sea level rise for every 1 degree increase in average world surface temperature. There is a long delay between our putting increased carbon dioxide in the air and when it shows up as sea level rise, because the seas are very cold and very slow-moving. But the rise is already built in, and we could see a catastrophic 5 feet rise even over the next 100 years.

This is a crisis that needs a world-wide Manhattan Project with a 10 year deadline, starting now.

An academic team from McGill University films the dilemma:

“We came to the Guna community of Gardi Sugdup because the village decided to abandon its island and move to the mainland. This will be a first migration to the mainland in more than 100 years. We will try to understand why that decision was made.”

Readers in industrial countries should understand that we are spewing carbon dioxide into the air by driving our cars, air conditioning or heating our homes, cooking our food, etc., and that we are the ones who are making the Guna homeless; they were just living on their island, fishing and gardening, and living a low-carbon style of life.

We will be moving hundreds of millions of people out of their homes this way over the next century, a global catastrophe of a sort not known in recorded history. Egypt and Bangladesh and Indian Bengal are among the most threatened. Also the cities of Miami and New Orleans.