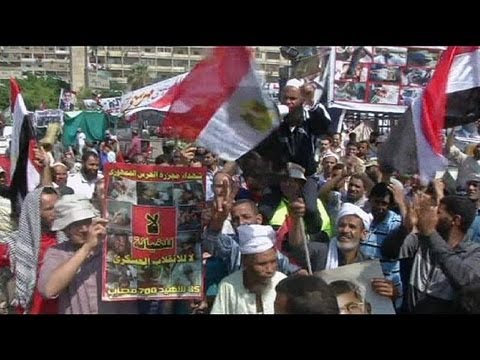 Egypt’s June 30 Movement is calling for big demonstrations on Sunday, saying “no” to “terrorism” and “yes” to the “gains of the Revolution.”

The movements appears to be identifying elements of the deposed Muslim Brotherhood government as ‘terrorists’ (as far as I know it is mainly the Sinai Muslim radicals that fit that bill, not the government of deposed President Muhammad Morsi and his circle).

In keeping with this sentiment, Egypt’s public prosecutor announced that it is investigating Morsi and other senior Muslim Brotherhood figures for “spying, inciting killing protesters, attacking military barracks and damaging the economy.”

The secular elite’s obvious determination to criminalize the Muslim Brotherhood, which is supported by millions of Egyptians, is a very bad sign for civil liberties in Egypt.

Euronews has video on the Muslim Brotherhood supporters’ insistence they’ll continue their sit-in until Muhammad Morsi is restored to the presidency: