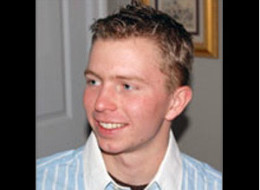 Breaking news: Firedog Lake reports that Bradley Manning has been found not guilty of aiding the enemy, a blow against the Obama administration’s repeated attempts to smear whistleblowers as traitors. The other charges against him could put him behind bars for 100 years.

But just so it isn’t forgotten, Manning’s journey to sentencing has been literally a tortured one. Below is a reprint of my column, written when Manning was still in the brig at Quantico, comparing him to Tunisia’s Mohamed Bouazizi, whose act of self-sacrifice touched off the Arab world’s search for bread, dignity and social justice. Obama’s then spokesman, P. J. Crowley, lost his job because he dared complain about this sordid episode:

Activists David House and Jane Hamsher tried to visit Pfc. Bradley Manning, who stands accused of leaking classified US government documents, at Quantico on Sunday. They allege that while still outside the base, they were given a run-around, threatened with having their car towed, and then essentially detained for two hours, until the 3:00 pm end to visiting hours arrived. They were not on the base, and House is on an approved visitor list. They were trying to see Manning, whose health they say has deteriorated because of the harsh terms of his detainment, and to deliver to the base commander a petition with 40,000 signatories asking that the terms be eased.

The suspicious behavior of the authorities at Quantico raises the question of why they were trying to keep House from seeing Manning on Sunday. What had been done to their prisoner that they didn’t want coming out?

Manning’s treatment as though he were a terrorist contrasts to the lionization of other kinds of dissident. If it is true that Manning turned State Department documents over to Wikileaks, then he played a small role in the Tunisian Jasmine Revolution, which overthrew the brutal and grasping dictator, Zine el-Abidine Ben Ali, whom the US government had been coddling and the French government actively supporting. Ben Ali’s cruelty to political prisoners is now emerging, as they are being released and telling their story.

Desperation at the policies of the Tunisian government had driven college graduate turned vegetable peddler Mohammad Bouazizi to set himself on fire in protest. The government had supplied him no job, then had confiscated his vegetable cart, then slapped and humiliated him when he protested. Bouazizi was driven to desperation, knowing that the Tunisian system was closed so tight that it offered him no recourse, no hope for reform. His only means of protest was to start a fire and sacrifice his own life. His protest set off public disturbances throughout the country. In the midst of this “Jasmine Revolution,” a leaked US embassy cable about the corruption of President Ben Ali came to the attention of the Tunisian public, lending legitimacy and urgency to their efforts to unseat him. It may have been leaked by Manning.

Manning, like Bouazizi, is young. He also faced, with all his youth and inexperience and impatience, a political situation that was the result of criminality. Dick Cheney and John Yoo and Karl Rove and George W. Bush were responsible for creating a public image of government lawlessness that encouraged whistle blowing. They went to war against Iraq on false pretenses and in contravention of international law. They themselves tried to leak the identity of Valerie Plame, a covert CIA operative, to the press. They set up Guantanamo and Abu Ghraib and Bagram as black torture facilities. They lied repeatedly to the American people (there was no looting in Iraq, no guerrilla war in Iraq, no civil war in Iraq, no torture practiced by the US in Iraq, no more than 30,000 civilian dead in Iraq, no need for more armored vehicles for our troops in Iraq).

The political situation Manning faced was also unyielding. Long after the American public turned against Washington’s Forever Wars, they are still being pursued, and are killing thousands of innocent civilians for war goals that range from the highly unlikely to the utterly phantasmagoric. Manning’s leak was an act of desperation no different in intent from Bouazizi’s self-immolation. He intended to protest, by putting himself on the line. He wrote in chat room, “god knows what happens now — hopefully worldwide discussion, debates, and reforms — if not & we’re doomed.” He did not intend to get caught, but he must have known the risks. His was a cyberspace form of self-immolation, a career-ending, decisively life-changing act that, however foolhardy or possibly illegal, was certainly courageous.

President Obama belatedly praised “the courage and dignity of the Tunisian people” and said,

“The United States stands with the entire international community in bearing witness to this brave and determined struggle for the universal rights that we must all uphold, and we will long remember the images of the Tunisian people seeking to make their voices heard.”

So one of the universal human rights the Tunisians wanted was freedom from harsh conditions of detention when charged with thought crimes.

As a service member under arrest in preparation for a military trial, Manning lacks many of the protections of US civilians charged with wrongdoing, but there are military regulations about pre-trial treatment that his defense alleges are being violated. There are also provisions in international law to which the US is signatory and which may be being violated.

Manning was placed on suicide watch for two days last week, and is in general in maximum security detention and subject to ‘prevention of injury’ (POI) rules.

Manning’s psychiatrists say there is no reason for the POI. This procedure allows guards to wake Manning up whenever they cannot see his face (i.e. if he rolls over on his bed while sleeping).

There is a strong possibility that solitary confinement (i.e. social isolation) and sleep deprivation are being used by Manning’s jailers as a form of torture to soften him up. It is possible that they want from him information that would allow them to pursue conspiracy charges against Wikileaks, and this mistreatment is the way they think they can get it from him.

Ironically, Among Amnesy International’s charges against the Ben Ali regime in Tunisia was this:

And, yes, among the techniques used against prisoners was “sleep deprivation.”

No one is saying that Manning is being physically abused. But he is being psychologically abused, which is still a form of inhumane treatment. Both the United Nations and the US State Department have called sleep deprivation a form of torture. Glenn Greenwald has also made this case.

There is little recourse for Manning until the court convenes and pleas are entered, at which time his military attorney can submit a complaint about the terms of his detention. Attorney David Coombs has in the meantime protested on the grounds of article 13 of the Uniform Code of Military Justice, which says:

‘ No person, while being held for trial, may be subjected to punishment or penalty other than arrest or confinement upon the charges pending against him, nor shall the arrest or confinement imposed upon him be any more rigorous than the circumstances required to insure his presence, but he may be subjected to minor punishment during that period for infractions of discipline. ‘

Just Saturday, Coombs filed an article 138 complaint, as well. This complaint alleges a perceived wrong committed by his command against a service member, under the UCMJ.

Amnesty International has addressed a letter to US Secretary of Defense Robert M. Gates about the treatment of Manning.

‘ We are informed that, since July 2010, PFC Manning has been confined for 23 hours a day to a single cell, measuring around 72 square feet (6.7 square metres) and equipped only with a bed, toilet and sink. There is no window to the outside, the only view being on to a corridor through the barred doors of his cell. All meals are taken in his cell, which we are told has no chair or table. He has no association or contact with other pre-trial detainees and he is allowed to exercise, alone, for just one hour a day, in a day-room or outside. He has access to a television which is placed in the corridor for limited periods of the day. However, he is reportedly not permitted to keep personal possessions in his cell, apart from one book and magazine at a time. Although he may write and receive correspondence, writing is allowed only at an allotted time during the day and he is not allowed to keep such materials in his cell.

We understand that PFC Manning’s restrictive conditions of confinement are due to his classification as a maximum custody detainee. This classification also means that – unlike medium security detainees –- he is shackled at the hands and legs during approved social and family visits, despite all such visits at the facility being non-contact. He is also shackled during attorney visits at the facility. We further understand that PFC Manning, as a maximum custody detainee, is denied the opportunity for a work assignment which would allow him to be out of his cell for most of the day. The United Nations (UN) Standard Minimum Rules for the Treatment of Prisoners (SMR), which are internationally recognized guiding principles, provide inter alia that “Untried prisoners shall always be offered opportunity to work” should they wish to undertake such activity (SMR Section C, rule 89). PFC Manning is also being held under a Prevention of Injury (POI) assignment, which means that he is subjected to further restrictions. These include checks by guards every five minutes and a bar on his sleeping during the day. He is required to remain visible at all times, including during night checks. His POI status has resulted in his being deprived of sheets and a separate pillow, causing uncomfortable sleeping conditions; his discomfort is reportedly exacerbated by the fact that he is required to sleep only in boxer shorts and has suffered chafing of his bare skin from the blankets.

We are concerned that no formal reasons have been provided to PFC Manning for either his maximum security classification or the POI assignment and that efforts by his counsel to challenge these assignments through administrative procedures have thus far failed to elicit a response. We are further concerned that he reportedly remains under POI despite a recommendation by the military psychiatrist overseeing his treatment that such an assignment is no longer necessary.’

If an American citizen, convicted of no crime and innocent until proven guilty, can be held under such conditions arbitrarily for half a year, essentially softened up and tortured as a means of extracting information from him, then the Republic is in extreme danger. Indeed, it may be that John Yoo, Karl Rove, Richard Bruce Cheney, and George W. Bush are already winning in their war on civil liberties in favor of a monarchical national security state.

President Obama, has made some important advances in abolishing torture and restoring some civil liberties, but it is a mixed picture, as the ACLU explained just a few days ago. He has a duty to intervene to stop the abuse of Pfc. Manning.

If Manning has broken the law, he will be tried and convicted and punished in accordance with the law. In the meantime, as long as he is being treated as though he were at Guantanamo, all of us are.