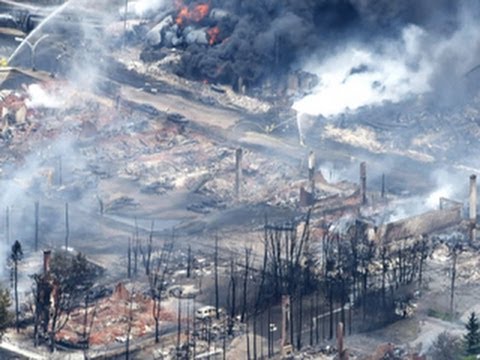 Train cars carrying petroleum became unmoored and rolled seven miles before jacknifing and exploding, inflicting heavy damage on the town of Lac Megantic in Quebec. At least 5 are dead, 40 are missing, and over a thousand were evacuated because of toxic fumes and the outbreak of fires.

Industrial accidents involving petroleum are a major cost of depending on oil for transportation, which no one figures into the price of fuel. Not to mention industrial spillage of petroleum products into rivers and lakes. Tens of thousands of Gulf residents have still not recovered from the damage inflicted on them by BP’s Event Horizon leak. Arkansas was hit by a major oil spill in March. Alberta has also been bedevilled by oil spills.

Rapidly moving to electric or electric/ hybrid vehicles such as the Nissan Leaf, the Chevy Volt and the Tesla Model S, and fueling them with wind and solar power, would not only reduce carbon dioxide emissions in the medium term, but would end the scourge of the industrial-scale pollution of our land and water.

Forget all those propaganda points you’ve heard. Aside from the US Midwest, where electricity mainly comes from coal, in much of the US using electric vehicles very substantially reduces CO2 emissions, as the Sierra Club argues. Even in 50/50 coal-burning areas like the UK, an electric car would save at least 20% of carbon emissions, and this is counting the manufacture of the battery. And even in the Midwest, a lot of towns are putting solar panels on city parking garages and providing charging stations, so that you can fill up carbon free while at work. (Depending on your work schedule you can also put solar panels on your roof and do the same thing).

There is nothing standing in the way of our switching over to EVs or hybrid EVs like the Volt very rapidly. It is mainly held up by poor public policy and a failure to calculate the real cost of hydrocarbons (quite apart from being toxic to the environment, burning petroleum causes ruinous climate change).