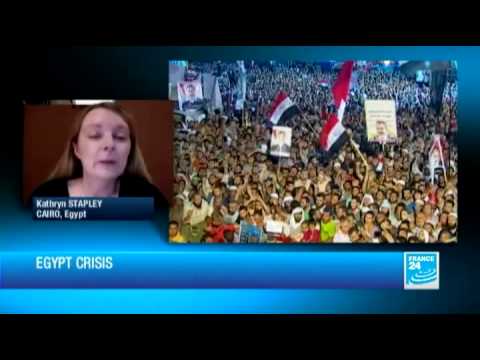 There are two places the Muslim Brotherhood is emulating the revolutionary youth of 2011 and occupying a public square– the place in front of the Rabi`a al-`Adawiya Mosque near Nasr City and the Nahda Square in Giza.

The interim Egyptian cabinet ominously directed the Interior Ministry on Wednesday morning that it intended to disperse these crowds.

This is a stupid thing to do, not to mention probably illegal in current Egyptian law, and it will cause Egypt a great deal of bloodshed and heartbreak if they go through with it.

The Muslim Brotherhood said it would defy any attempt to remove them.

The crowds in those two places have been largely peaceful, though over the weekend some Muslim fundamentalist from Rabi`a tried to occupy 6 October Bridge using molotov cocktails and stone-throwing, and the army pushed them back way too violently, massacring over 70 people.

In the absence of more such attempts to use Rabi`a to paralyze Cairo city traffic, there doesn’t seem an obvious reason why the government doesn’t just let them demonstrate. The crowds don’t seem to be growing or gaining support, so even just on a political calculation, why not let them gradually dwindle?

The Egyptian police and military are not good at crowd control, and have committed many massacres since Jan. 25, 2011– at Tahrir, Maspero, the Ministry of Defense, etc., etc. The Muslim Brotherhood appears to be relatively unpopular at the moment, and it would be foolish to make them martyrs.

So far, the Egyptian officer corps has not behaved wisely. Their increasing witch hunt against the Brotherhood as a “terrorist” organization makes them look paranoid and foolish to the outside world. Morsi may have been arrogant and high-handed, but he isn’t a terrorist.

Meanwhile, the Arabic press says that the interim government is looking into the sources of the wealth of high Brotherhood officials, implying that they are paid foreign agents or at least getting kickbacks from someone.

In the provinces, clashes are still breaking out between nationalist peasants and Muslim Brotherhood members. Near Mansura, Morsi supporters demonstrated and blocked a main road, infuriating the other villagers, who attacked them but discovered that the Brotherhood members had firearms. The security forces were intervening after hours of hard fighting.

France24 reports on the Brotherhood’s defiance:

In the meantime, April 6, the Revolutionary Socialists and other left-liberal youth organizations central to the Jan. 25, 2011, revolution have set up a protest at a “Third Square.” They reject both theocratic Brotherhood rule and military rule.