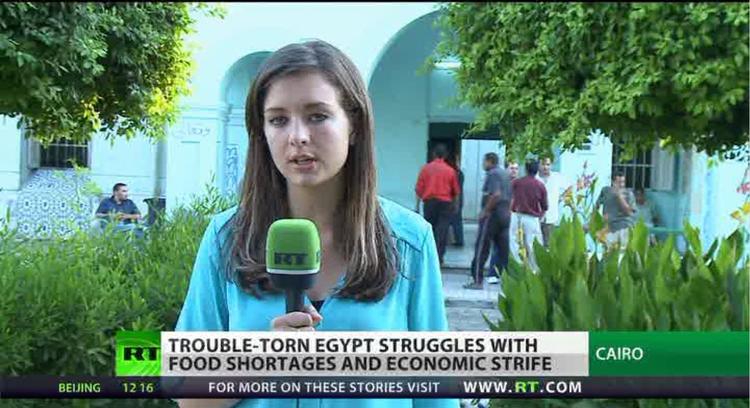 In the midst of its political crisis, Egypt also faces rising food prices that are hitting the poor hard. This rise comes on top of tremendous price increases for staples under deposed president Muhammad Morsi this past year, as a result of the government not importing enough wheat and the 15% fall in the price of the Egyptian pound. The fall of the pound made all imported goods, including wheat for flour and therefore bread, more expensive. The high food and diesel costs were among the things that made Morsi increasingly unpopular with the peasant and working classes.

Meanwhile, the USG Open Source Center translates an article by Abd al-Sattar Hutaytah, Cairo, in the Pan-Arab, London-based daily, “al-Sharq al-Awsat” [The Middle East] for Aug. 10, which details the plans of the interim government in Egypt to disperse the Muslim Brotherhood slowly over three months rather than with a sudden attack that would risk high rates of fatalities. 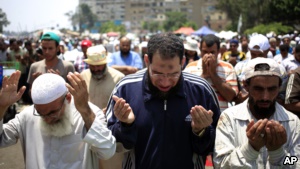 “Al-Sharq al-Awsat” has details of the Egyptian plan to break up the Muslim Brotherhood (MB) sit-in in Rabi’ah al-Adawiyah Square. The plan adopts a “gradual” rather than a “decisive” approach to ending the protest, in which tens of thousands of people demanding the return of former President Muhammad Mursi to power are participating. Mursi was ousted by the Army under tremendous popular pressure in early July. The Egyptian authorities two days ago announced the failure of the international efforts to resolve the crisis, which might lead to a cycle of violence in the country, especially after the Islamists threatened to escalate violence against the state in case the Rabi’ah al-Adawiyah sit-in, in which fugitive MB leaders are barricading themselves, is broken up.

Sources said that top Egyptian leaders held several high-level meetings in the past two weeks “to deal with the MB problem” as mediation efforts by international parties from the United States and Europe ended with the MB insisting on its rejection of the new situation and refusal to end the protests. They said the plan that the Egyptian leaders drew up, and which will be implemented in the next 48 hours, seeks to break up the protest “gradually”, not through “a sudden attack or a single blow” as some people expected. The aim is to “evade the fall of a large number of victims.” The sources said the meetings, in which Army and security leaders took part, were held based on “the popular authorization” that the new authorities obtained on 26 July.

About 10,000 MB supporters are staging another sit-in in Nahdat Masr Square in Al-Jizah Governorate, which is adjacent to Cairo. But the sources said this sit-in is “much easier and less costly” to break up compared to Rabi’ah al-Adawiyah sit-in, which is located in the middle of a residential area in eastern Cairo. One source — an official involved in the negotiations among the Egyptian leaders that ended yesterday with the adoption of the new plan to break up the MB protest in Rabi’ah al-Adawiyah — said the reports that the Interior Ministry submitted after the Council of Ministers entrusted it with breaking up the protest showed that the operation would cause big human losses, which might harm the country’s reputation…

The source said the Interior Ministry’s reports that were submitted and studied by the senior officials estimated that “breaking up the protest by force and in a swift manner will lead to the death of between 3,000 and 5,000 people.” The source said part of the discussions in those meetings concluded: “If a large number of people are killed, we will be in an embarrassing situation. We do not want to have an economic problem with the world.” The source added: “There is now something like a thin thread in Egypt that we do not want to pull too hard so as not to break, not for the sake of the MB but for the sake of the state.”

The source added: After studying the Interior Ministry’s assessment of a speedy dispersal of the demonstrators in Rabi’ah al-Adawiyah, “which would result in a large number of victims,” it was agreed that this option “will probably constitute a blot of shame in Egypt’s history. It will be used by foreign forces against the state at a time when we want to show the world a civilized image of Egypt.”

Because of all these reasons, the source said, “an alternative plan to break up the protest has been adopted.” Under this plan, “anyone who leaves Rabi’ah al-Adawiyah Square will not be allowed to return to it. Food will not be allowed to enter the square, and water and electricity will be cut from the area where the protestors are gathered.” The plan also includes “attacking protestors with water cannons, teargas canisters, and other means used to break up sit-ins and demonstrations that close roads, as happens all over the world.” The source said “this operation will continue over stages and might take several weeks or months. But the plan has a maximum time limit of three months.”