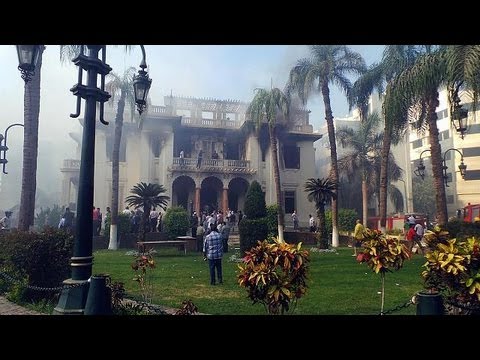 Within Egypt, and in many other Arab countries, the shocking killings of Black Wednesday have elicited horror in many quarters, but have actually been supported in many others. I am in the horrified camp, and ask myself how in the world people can be indifferent to or even justified what the Egyptian military did.

It is always dangerous to try to explain an unpleasant reality, since some inept readers will assume that explanation is justification. All I can say is, it’s not.

Those anti-Muslim Brotherhood Egyptians and Arabs who feel little sympathy for the victims typically depict the Brotherhood as a violent cult stockpiling weapons and kidnapping and torturing people. That is, they speak about the sit-ins in Giza and Nasr City the way the Clinton administration spoke of the Waco cult of Branch Davidians, which US law enforcement besieged and attacked in winter of 1993. Just as the Branch Davidians were depicted as closed, cultish, deviant, violent stockpilers of weapons, so that is increasingly the language used about the Muslim Brotherhood by their critics in the region. President Clinton blamed them for the fires that killed members during the FBI assault, including children. I should underline that the Muslim Brotherhood is a major group in Egypt and not in fact analogous to a small cult like the Branch Davidians. I’m just talking about the attitude to them among the military, the old Mubarak elite and even the Rebellion or Tamarrud youth spokespeople, who led the effort to unseat Muhammad Morsi.

These observers are struck not by the body count but by what they call the clear evidence of weapons stockpiles at the sit-ins.

It is true that on Wednesday and Thursday, Muslim Brotherhood cadres did deploy firearms against the police, killing some 50 of them. There was a report of the Brotherhood actually using mortar rounds against a police station in the upper Egyptian city of Asyut. Euronews reports that Brotherhood attackers took over the governorate offices of Giza with firearms and then burned it (see also RT :

Brotherhood cadres have also burned down at least 12 Coptic Christian churches and attacked 28 others in the past two days, as well as shooting dead at least 3 random Christians. They blame the Copts for supporting the coup against Morsi, though the Copts as a minority of 10% of the population are powerless and hardly conducted the coup.

But such violence (inexcusable as it is, especially toward innocent Christians) is an outcome of the coup and of the dispersal of their protests, and was not typical of the movement in the past 3 decades.

According to opinion polling, some 57% of Egyptians either felt that the Brotherhood protesters at the sit-ins were terrorists or included terrorists among them. Only about a fifth sympathized with them. Nearly two-thirds wanted the sit-ins broken up “immediately” (though they mostly preferred it be done “peacefully.” These findings are shocking, since the mainstream of the Muslim Brotherhood gave up violence in the 1970s and has been participating in parliamentary elections (even though until 2011 they were known to be rigged) since them. Moreover, I suspect that these attitudes stem from the past year of Brotherhood rule, since Gallup found that in early 2012 some 60% of Egyptians had a favorable view of the Brotherhood, which fell to 19% in early June, 2013. Morsi’s violent crushing of protests against his constitutional decree of November, 2012 putting himself above the law, including the alleged deployment of Brotherhood paramilitary against the New Left youth crowds, seems to have been a major turning point in shaping images of the movement.

The Tamarrud or Rebellion movement of Mahmoud Badr and others had actually forwarded a memo to the United Nations asking them to designate the Muslim Brotherhood as an international terrorist organization.

A splinter group of the Muslim Brotherhood, “The Brotherhood without Violence” is also making wild charges that the inner circles of the Brotherhood leadership are planning a bloody campaign of violent reprisals.

It is not only Egypt. The Kuwaiti newspaper al-Siyasa headlined on Thursday after the bloody events, “Egypt breaks up Sit-in of the Brotherhood of Terror,” saying the long-suffering Egyptian people had awaited the end of this nightmare of the Muslim Brotherhood, which had turned city squares into armed camps.

Entertainment stars even got into the action. Asked about the car bomb in a Shiite neighborhood of Beirut that killed 18 on Thursday and the events in Cairo, diva Haifa Wahba expressed anguish at the region’s terrorism problem and asked God to “save us from those cannibals and from blind hatred.” I think she was referring to the perpetrators of the car bomb, but in the general context some people in the region read her as denouncing the Muslim Brotherhood as cannibals along with the violent Sunni extremists of Beirut. (Haifa is from a mixed Shiite and Christian background, and is known for steamy music videos, so Sunni fundamentalism would certainly not like her very much).

It should just be pointed out that the far Right in the US considered Waco an unjustifiable massacre, and that the Oklahoma City bombing of the Federal building, among the worst instances of domestic terrorism in US history, came about in part as a reaction to it.