About those US embassy closures in the Middle East: they make the US look like a wimp.

The United States is still the world’s primary superpower, for better or worse, and it has the potential to influence the world in both positive and negative ways. At one extreme, its unique geopolitical position allows it to violate international law with impunity and do things like invade and occupy Iraq in the teeth of opposition from the UN Security Council. At the other extreme, the US can play a positive role, as when it helped achieve an agreement between the UK, the Irish Republican Army, and the Republic of Ireland, in 1996. Or when President Eisenhower told then French President Charles De Gaulle that France would just have to get out of Algeria since colonialism was over with. On another level, US AID has saved millions of people from malaria.

As with George Mitchell and Northern Ireland, the most effective uses of American power have been diplomatic. But hawks in Washington always want to drag us into foreign wars, in part to benefit their buddies in the arms industry. The current GOP is divided on the issue of US power abroad, with Libertarians like Rand Paul viewing foreign wars as a waste of money and a fruitless enterprise, but hawks like John McCain and Lindsey Graham failing to discover a potential war that they don’t just love to death.

But the GOP is inadvertently pushing the US into a posture of dangerous diplomatic weakness. This weakness is clear in the unprecedented closing of 21 US embassies in the Middle East this weekend because of a vague terrorist threat apparently emanating from “al-Qaeda in the Arabian Peninsula,” based in Yemen.

The Obama administration most likely took this weird step to insulate itself from any further witch hunts of the sort the Republicans launched over the tragic attack on a CIA safe house doubling as a US consulate in Benghazi, Libya, on Sept. 11, 2011. That a radical extremist cell should have attacked in this way was a surprise, since the radicals had been persecuted by Muammar Gaddafi, and the US had helped overthrow the dictator. I was in Benghazi in summer of 2011 and was told that personal security was not so bad (you wouldn’t be mugged as an individual), but that militias might steal from, e.g., a company. The existence of a set of terrorist cells that would and could kill ambassador Chris Stevens and three others was not clear. When the surprise attack was launched, the Libyan government organized a special forces unit to extract the remaining dozens of Americans and get them to Tripoli, with it did without further loss of life. There is no reason to think that the Obama administration behaved inappropriately through the crisis.

But the constant innuendos on the Hill that some sort of malfeasance occurred in Benghazi has pushed the Obama administration to cover its collective behind. So the Tunisian and Libyan embassies are skeleton crews, with very few personnel, and their families have been sent back to the states. An embassy can’t be effective like that. But the embassies are less vulnerable to becoming Washington scandals if there is almost no one there, reducing casualties if there were another attack.

In 1983 the US embassy in Beirut was blown up, and the Democrats who controlled both houses of Congress didn’t try to impeach Ronald Reagan about it, or force Reagan into closing down embassies lest he be crucified by the other party. The Dems in Congress actually agreed to Reagan’s request after the bombing to give Lebanon $225 mn in aid! It didn’t occur to them to try to impeach Reagan because an embassy got blown up on his watch. 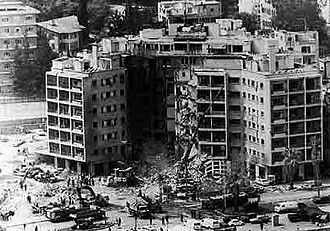 So at a time when Tunisia and Libya facing the greatest popular turmoil since 2011, you have American embassies barely functioning and not able effectively to engage in diplomacy, suggest compromises, push for moderation. The GOP produced this sad situation by forcing the administration to protect themselves from further invidious inquisitions.

Now the Benghazi Disease has spread from Tunisia and Libya to the whole Middle East. Al-Qaeda in the Arabian Peninsula is a few hundred guys out in the boondocks of Yemen (and that is really the boondocks). They have a pathological fascination with the non-metallic explosive PETN, which is why we all have to get naked at the airport while scanners look for pouches of it, since it wouldn’t set off the metal detectors. They did try to attack the US Embassy in Sanaa in 2008 and killed 6 of their own guys. As far as I can tell they have a dearth of successful operations.

It is inappropriate to give AQAP the idea that they can push around a superpower this way. And it isn’t as if the US embassies have nothing to do. The diplomats of the State Department need to be representing the US in the region at this parlous time, not in an overbearing or interventionist way, but simply offering their advice and their good offices for settling disputes. If the Egyptian military goes after the Muslim Brotherhood in Egypt the way it has announced it wants to, it could push that country into a long term low-intensity war. Shouldn’t the US embassy be trying to forestall that outcome? Of course, both sides in the current struggle blame the US for supporting the other. But that ridiculous outcome is only possible because the embassy isn’t putting in its two cents and is, like, closed.

It is true that the closings were for two days (or most were–some may be for a week, and some may be repeated), and that on the weekends when the diplomats might not be that busy. But Sunday is a work day in much of the Middle East, and in some places both Saturday and Sunday are.

Beirut, Amman, Sanaa, Manama– these are not quiet places these days. They are places where US diplomats need to be able to do their jobs.

CBS News reports on the closings:

This embassy closure business is so bizarre and hysterical that many Americans on the left have concluded that it is a piece of misdirection by Obama to take the focus off the National Security Agency’s monitoring of ordinary Americans en masse and the abrogation of the Fourth Amendment.

I can’t rule out that the administration is playing that kind of politics with our diplomacy. But as you can tell I think the story is a different and sadder one. The Republican Party is now so Raptor-like that it is preventing an entire Department, the one first headed by Thomas Jefferson, from doing its job at a time of turmoil and danger in a strategic part of the world.