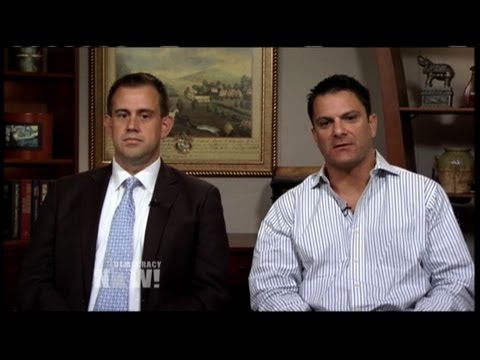 Amy Goodman’s “Democracy Now!” gets an exclusive interview with Ladar Levison, who closed down his Lavabit encrypted email service rather than comply with Federal demands that he allow it to be monitored. Levison’s plight, whereby he was ordered to do something against his conscience without a warrant and then placed under a gag order not by a judge but by an arm of the executive, is clearly a violation of his constitutional rights. I’d like to point out that if Barack Obama and Eric Holder wanted, they could just instruct the FBI and the NSA not to behave this way. That Bush’s anti-Patriotic Act lets them do something doesn’t mean this administration has to.

“Lavabit, an encrypted email service believed to have been used by National Security Agency leaker Edward Snowden, has abruptly shut down. The move came amidst a legal fight that appeared to involve U.S. government attempts to win access to customer information. In a Democracy Now! broadcast exclusive, we are joined by Lavabit owner Ladar Levison and his lawyer, Jesse Binnall. “Unfortunately, I can’t talk about it. I would like to, believe me,” Levison says. “I think if the American public knew what our government was doing, they wouldn’t be allowed to do it anymore.” In a message to his customers last week, Levison said: “I have been forced to make a difficult decision: to become complicit in crimes against the American people, or walk away from nearly 10 years of hard work by shutting down Lavabit.” Levison said he was barred from discussing the events over the past six weeks that led to his decision. Soon after, another secure email provider called Silent Circle also announced it was shutting down.”

From the transcript: Levison reveals that he is not permitted to discuss his case even with his attorney:

“AMY GOODMAN: Glenn Greenwald also wrote, “What is particularly creepy about the Lavabit self-shutdown is that the company is gagged by law even from discussing the legal challenges it has mounted and the court proceeding it has engaged. In other words, the American owner of the company believes his Constitutional rights and those of his customers are being violated by the US Government, but he is not allowed to talk about it.”

Greenwald goes on to write, quote, “Just as is true for people who receive National Security Letters under the Patriot Act, Lavabit has been told [that] they would face serious criminal sanctions if they publicly discuss what is being done to their company.” . . .

LADAR LEVISON: Well, just to add one thing to Greenwald’s comments, I mean, there’s information that I can’t even share with my lawyer, let alone with the American public. So if we’re talking about secrecy, you know, it’s really been taken to the extreme. And I think it’s really being used by the current administration to cover up tactics that they may be ashamed of.”