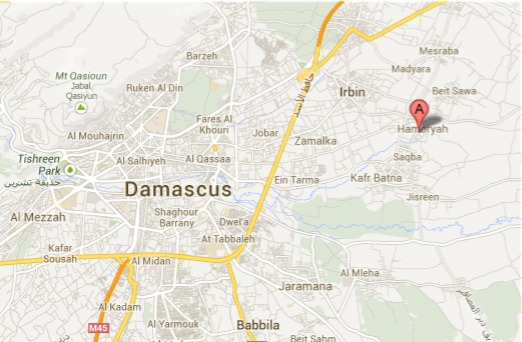 What is known is that during heavy bombardment of Ghouta in Rif Dimashq on August 21, rockets were fired that did not explode and instead released gases that killed several hundred people, most of them non-combatants, and injured hundreds of others.

US intelligence agencies released an intercept on Wednesday showing that after the attack, a ministry of defense official made outraged inquiries from a local commander as to what in the world he had done.

The intercept would be consistent with local Baath chem warfare units routinely mixing a little deadly sarin gas into crowd control gas, killing small numbers of rebels with each deployment, but in this case making an error and getting the mix wrong. Thus, around a thousand were killed instead of dozens. British intelligence seems to have come to a similar conclusion

Apparently there are new, Jordanian-trained, guerrilla forces in Rif Dimashq near the capital that account for the local commanders’ panic and desire to forcefully push them back.

It does put paid to the crackpot conspiracy theory, advanced by the regime and the Russians, that the rebels gassed themselves.

The character of the evidence released seemed to slow the Obama administration’s march to a military strike on Damascus, which had been expected by today, Thursday, but now seems likely to be delayed until next week at the earliest.

UN Secretary General Ban-Ki Moon showed some unusual backbone and demanded that the UN weapons inspectors be allowed to finish their task. They have taken blood and soil samples from Ghuta and won’t be done in Syria until at least Monday.

The Arab League condemned the Syrian regime for the chemical weapons use but rejected the idea of Western military intervention.

Mobilized youth movements in the region such as Tamarrud in Egypt also rejected Western military intervention in an Arab country.

Unlike in Libya, there is no regional multilateral framework, or public opinion support, for an intervention.

The British push for a UN Security Council resolution appears to be going no where. Even the British parliament is pushing back against unilateral British military action in Syria in the absence of a UNSC resolution.

Belgium and other European Union countries are not convinced of the legitimacy of a strike. Germany is nervous about anything that looks like illegal aggression, for historical reasons.

In the US, Speaker of the House John Boehner and other representatives, along with many senators, want President Obama to seek their advice and consent before taking a step that could lead to another US war in the region.

President Obama has probably boxed himself into rather uselessly tossing a couple of cruise missiles onto Damascus next week. For a thoughtful man he often seems to lock himself into undesirable courses of action by ill-considered and hasty public remarks. But whatever he does, it seems clear that it won’t have the kind of multilateral framework he prefers, and he’ll have to cowboy it.

Wasn’t that where he came in?